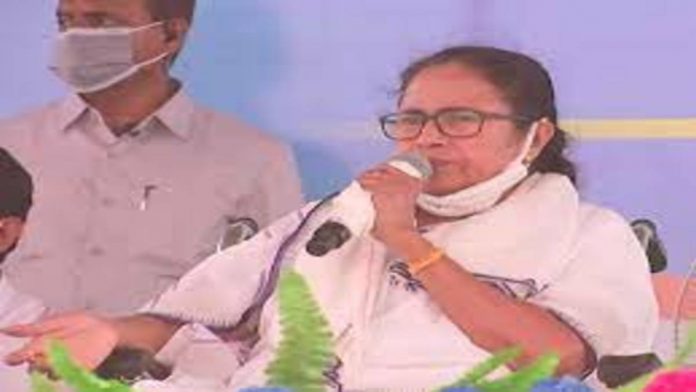 West Bengal Chief Minister Mamata Banerjee after getting the second notice from the Election Commission on Friday said, it seems that the state was under “under Article 356” which means Central rule and alleged that it is not EC that is running the state but the Union Home Minister Amit Shah.

Referring to the second notice Mamata said, “Ete amar kichhu eshe jay na (I’m not bothered by it),” adding “she was with people, still remains with people and continue to do so in the future.” She even said that she will keep speaking against the central forces till they work for BJP and start saluting them the moment they stop working for BJP.

Questioning the model code that applies to her and not to PM Modi and Amit Shah she said, “Prime Minister eto ulto-palta kotha bole, tatey code violation hoye na (When the PM says things he shouldn’t, then the code isn’t violated). He campaigns on an election day. We would have stopped doing it if they didn’t. Pariksha pe charcha… you do your discussions in other states, why Bengal? Elections are going on here. Then no code is violated,” said the CM.

“Amit Shah speaks nonsense daily. Then no code is violated. And when Mamata Banerjee addresses people, it violates the code…. You (the EC) have show-caused me several times before, too. Why? I was not even allowed to campaign a day before the elections. You are changing everything. Every day you are doing what BJP is asking you to do. Who is BJP to you? And what do you think of me? That three people can do whatever they think?,” Mamata added.

She also cautioned people to not to listen anyone who “comes to you in police dress and ask you not to vote”.

Questioning BJP the chief minister said, “If you are winning so easily, why are you attacking Trinamool candidates daily? Yesterday, my Mathabhanga candidate — a member of the Rajbonshi SC community — was beaten up. He is in hospital. Sujata Mondal, my SC candidate in Arambag, was assaulted. Her security guard — a Bengal police officer — has a fractured skull. Rabin Manna, a Trinamool Congress worker in Nandigram, about whom I spoke several times before, died today in SSKM hospital. BJP has killed him. And the person responsible was grabbing votes. Police did nothing,” said Mamata Banerjee.

Saying that she respects the central forces the CM said, “I do not support Amit Shah. He is instructing police to do all the wrong things. It isn’t the Election Commission, but Amit Shah. He says CAPF is working under EC. They are working for Amit Shah. All instructions are being issued by Amit Shah’s office. I know they may even plan to kill me. I am not bothered. I will keep fighting like a tiger. We respect the country’s jawans. I salute them but I will not salute Amit Shah, under whose instructions they are working,” said Banerjee. She further said, “I would urge the Prime Minister to control his home minister. The way he is inciting trouble isn’t bringing BJP a good name. Sensing imminent defeat, they will try to manipulate… Amit Shah is planning; they will try to stir violence and riots.”