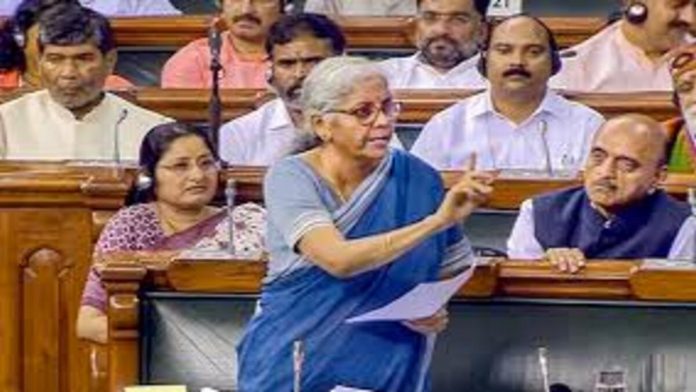 On August 1, 2022, Union Finance Minister Nirmala Sitharaman argued that the Goods and Services Tax (GST) levies on foods like curd, lassi, and wheat would not burden low-income households. She also criticized the States and the Opposition parties for attempting to imply that the Narendra Modi administration was behind the taxes when in fact the GST Council made the decision with the support of all the States.

In response to the Lok Sabha’s discussion of price increases, Ms. Sitharaman noted that the members’ focus was more on the political implications of price increases than on actual data-driven concerns, therefore her reaction would also be somewhat political.

Congress lawmakers left midway through the Minister’s response because they said they had no ideas to provide; afterwards, MPs from the DMK did the same thing after Ms. Sitharaman had shifted to Tamil to address their concerns.

The Finance Minister emphasized that the government had managed to keep inflation at 7 percent or lower despite a number of challenges, including the COVID-19 pandemic and its multiple waves, the conflict between the Ukraine and Russia, and supply chain disruptions that continue as a result of lockdowns in some areas of China. He added that the government was working to further slow the rise in prices.

“In accordance with the expectations of the public, we are delivering and working to lower inflation. Despite the fact that global trade is still not back to normal, we have managed to keep inflation at or below 7%. We are asked, “What are you doing about inflation,” even though we are striving to reduce our 7 percent inflation rate, Ms. Sitharaman pointed out.

The Minister compared this to trends in retail inflation under the UPA administration, stating that the rate of price growth had above 9 percent in 22 out of 28 months and had crossed 10 percent nine times. When questioned why we aren’t bringing it below 7 percent, she answered, “that should also be noted.”

“Facts need to be remembered when queries are frequently based on opinions rather than facts. An opposition member claimed that inflation existed prior to COVID as well. Yes, there was inflation. Let’s not forget that a minor taper tantrum by the U.S. Fed in 2008 caused issues that persisted up until 2013 and caused India to join the group of five weak economies, the Minister remarked.

In response to complaints that the GST charges on milk and other goods were “anti-poor,” Ms. Sitharaman claimed that the GST Council made the decision with the full support of the States.

The Minister stated that “no one said anything against it” and that “the Council” had chosen to stop leakages without burdening the poor in response to NCP member Supriya Sule’s claim that the former MVA government had written to the Center opposing the implementation of these levies.

There is no effect on the poor because the charge only applies to pre-packaged and pre-labeled goods. Similarly, we do not charge duty on packs weighing more than 25 kg because wholesalers can provide kirana shops tax-free. Anything sold untaxed is done so with the needy in mind. This needs to be kept in mind, the Minister said.

They question if you charge foods like puffed rice, curd, lassi, rice, and chiwda. Before the implementation of the GST system, several States, including Tamil Nadu, Telangana, Punjab, Maharashtra, and Andhra Pradesh, taxed goods like atta, dal, wheat, rice, besan, and paneer. According to her, I am not taxing them if they are purchased in loose form; it is only taxed if it is pre-packaged and branded.

“It’s wrong to make a decision inside, go outside, and blame the Center for it. At three different levels of discussion—at official committees, a ministerial group, and the Council—you came to an agreement. Today, you are making it seem as though Mr. Modi made the decision, she bemoaned.

Ms. Sitharaman cited recent comments made by Prime Minister Modi regarding giveaways when she argued that States should pay any outstanding debts owed to generation companies and discoms in the power sector. “They claim that we do not give money to the States. Before listing the debts owed by States like Tamil Nadu, Kerala, Rajasthan, and Telangana, she stated, “Discoms’ and generation firms’ dues must be addressed otherwise how can they create power for the people?

“Despite both local and global problems, India’s economy is the one that is expanding the fastest. For those who bring up the GST, let me reiterate that the GST Council is an institution headed by Modi.