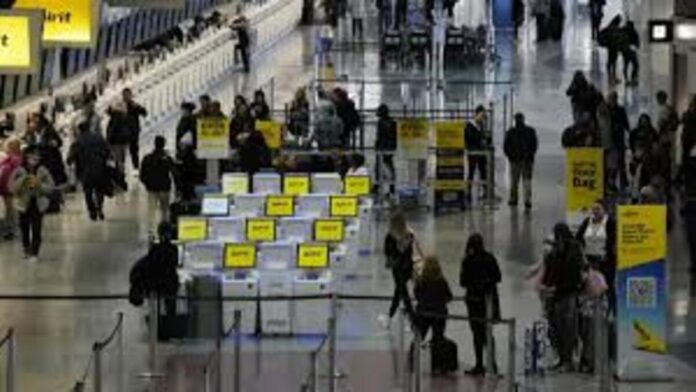 An issue with the Federal Aviation Administration’s (FAA) computer system on Wednesday caused delays for flights across the country. After the enormous disruption, operations have gradually restarted.

The White House disputed any proof of a hack and asserted that the regulator was attempting to identify the underlying source of the computer error.

“At this time, there is no proof of a cyberattack. The Department of Transportation has been ordered by the President to fully investigate the issues and provide frequent updates. Again, the safety of Americans who fly every day is extremely important and a top priority “At her daily news conference, White House press secretary Karine Jean-Pierre told reporters.

According to FlightAware, over 1,300 flights were cancelled and over 9,600 planes were delayed. This is the first nationwide flight cancellation in around 20 years. Despite the agency lifting a ground stop, the number of cancellations and delays has kept rising.

The FAA system breakdown that stopped aircraft nationwide on Wednesday morning has been the subject of an investigation ordered by President Joe Biden, who also stated that it’s unclear what caused it.

He responded, “We don’t know,” when asked if a hack was to blame for the outage.

According to Biden, “They don’t know what the reason is.” “Aircraft can still safely land, but they cannot take off at this time. We are unsure of what caused it.”

The FAA reported that flight operations have gradually resumed and that it anticipated airport departures to start up again at 9 am Eastern Time.

According to the White House Press Secretary, “Transportation Secretary Pete Buttigieg has been directed an after action process to precisely identify the fundamental causes and prescribe the next steps.”

According to Jean-Pierre, “The FAA and DOT will continue to be upfront here about the causes of the problem and how we’ll make sure a system outage of this size doesn’t happen again.”

“Our first priority is ensuring the safety of American passengers on aeroplanes. We wish to guarantee their safety. Making sure that this doesn’t happen again is the second half of this. And so, once more, there will be a follow-up procedure, and we’ll go from there “She spoke.

She claimed that the FAA is actively pursuing the causes of the system outage’s primary symptoms in order to prevent a repeat of what happened.

The FAA officials echoed this opinion when they stated that there was no proof of a cyberattack. The agency stated that an inquiry is ongoing after a preliminary evaluation linked the outage to a corrupt database file. The primary system and its backup were both infected by the same file, according to persons knowledgeable with the review who preferred to remain anonymous.

watch tokyo hot jav free IENF-247 Can male and female friendships be established? - ? - Limited to female students! - I let my male friend's cock experience intercrural sex with a piece of wrap ♪ NSM-043 Aphrodisiac Oil Massage Slut Voyeur & Creampie Amateur Girl VOL.43 A Woman Who Was Unknowingly Rubbed In Massage Oil Containing A Super Powerful Aphrodisiac During The Treatment Was Surprised By The Hotness Of Her Body And Bewildered By Her Wanting Cocks , I'm embarrassed by the dripping man juice, but I want it to be raw! 530DG-168 [Actual record] strong obscene video #04 GS-458 My Rough Chin That Was Begged For Production By An Exciting Esthetician! - ! - Full erection at the rumored men's esthetic! - It was so ticking that I couldn't stand it anymore, and I was asked to go back to the back of my throat! - ! GOGO-012 "I'm Going To Have An Affair From Now On..." An Adulterous Wife Who Has Her Kimono Disturbed And Embraced