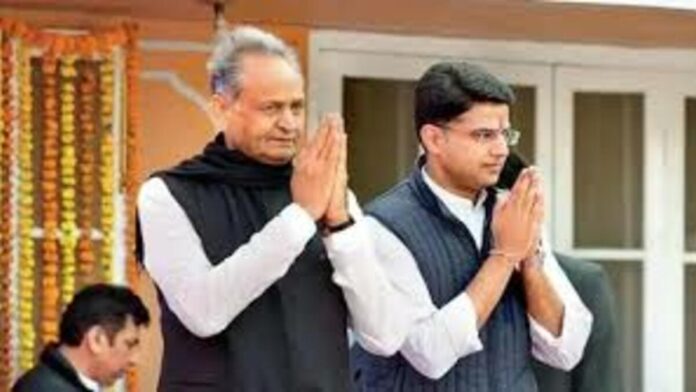 Following a shocking interview in which the Chief Minister referred to his erstwhile deputy as a “gaddar (traitor),” Sachin Pilot and Ashok Gehlot made an awkward show of unity today.

The rival politicians stood next to one other as they addressed the media in Jaipur, Rajasthan, and emphasised that Rahul Gandhi’s Bharat Jodo Yatra, which will arrive in the state on December 4, will be a huge success there.

“For us, the party is paramount. The party needs to move forward and reclaim its grandeur “Gehlot, the chief minister, said reporters.

“It is a major difficulty that there is a climate of tension throughout the nation. However, the yatra’s success demonstrates that the public firmly supports the concerns stated by Rahul Gandhi.”

The Bharat Jodo Yatra featuring Rahul Gandhi, according to Sachin Pilot, “would be welcomed with maximum excitement and zeal in Rajasthan.”

For the Congress, which is battling hostility between its two top leaders in Rajasthan just before Rahul Gandhi starts his 12-day visit of the state, the Gehlot-Pilot joint appearance was essential.

The rivals met with Gandhis’ dependable assistant KC Venugopal, who had been sent to Rajasthan to “oversee preps” for the yatra, and a detente was reached.

Mr. Gehlot said the following in an exclusive interview on Thursday: “The Chief Minister cannot be a gaddar (traitor). Sachin Pilot does not have ten MLAs, hence the High Command cannot appoint him as chief minister. he was revolting. He is a traitor since he betrayed the group.”

In reaction, Mr. Pilot stated that using such remarks by a senior official at a time when the Congress needed to present a united front was “unbecoming.”

The Congress was shocked by the free-for-all and underlined that the party “needs both leaders”—the knowledgeable Ashok Gehlot and the “young and enthusiastic” Sachin Pilot. The party further stated that the case would be settled in its best interests.

Rahul Gandhi denied yesterday that the “gaddar” controversy would affect his yatra. In Indore, he said, “It won’t affect the yatra and both leaders are assets to the Congress party.”

In response to those remarks, Mr. Gehlot remarked, “Where is the dispute then? Rahul Gandhi has said that our leaders are assets, so we are assets.”