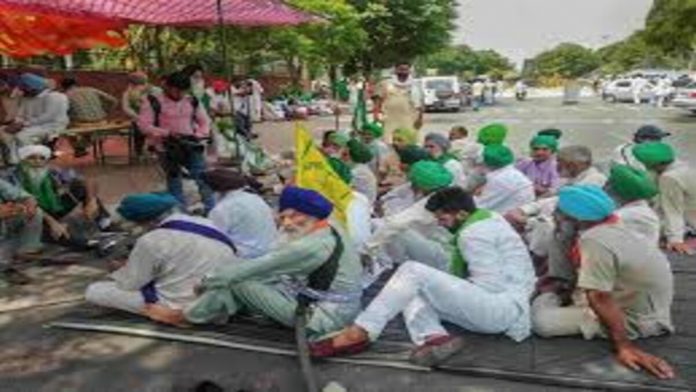 On Tuesday, Punjab farmers staged a demonstration outside the Chandigarh-Mohali border after being prevented from travelling to the state capital to press the AAP government on a number of requests, including a wheat bonus and the start of paddy sowing on June 10.

Farmer leader Jagjit Singh Dallewal issued an ultimatum to the Punjab government, saying that if Chief Minister Bhagwant Mann does not meet with protesters by tomorrow to address their issues, they will break barricades and march to Chandigarh.

Following many farmer organisations’ calls for an indefinite demonstration in the Union Territory over their demands, a large presence of police was positioned at the Chandigarh-Mohali border.

To prevent protesting farmers from entering Chandigarh, Mohali police set up roadblocks, tippers, and water cannons. Similar security precautions were made by the Chandigarh police.

“Our struggle in Punjab has only begun, and it will continue until our demands are met. So yet, only 25% of farmers have arrived here. Tomorrow will bring more. It’s a fight to the death “a farmer’s leader said

Several farmer unions have called for an indefinite demonstration in Chandigarh, similar to the year-long agitation against the Centre’s three agricultural laws, which were repealed as a result of the protests.

Farmers’ organisations called for an indefinite strike few days ago.

Farmers want a Rs 500 bonus on each quintal of wheat because their output has fallen and shrivelled due to the severe hot conditions.

They also oppose the Punjab government’s intention to allow staggered paddy seeding from June 18 in order to reduce electricity use and conserve underground water.

From June 10, the demonstrators want the government to allow them to sow paddy. They also want the minimum support price for maize and moong to be announced.

They also want the government to reduce the charges for extending the electrical load from Rs 4,800 to Rs 1,200, providing 10-12 hours of power, and releasing unpaid sugarcane payments. Protesters are also opposed to the use of smart electricity metres.

The farmers who were protesting said they had received a meeting invitation from the Punjab administration.

“The Union Territory DGP informed us that a meeting with Chief Minister Mann has been scheduled for Wednesday at 11 a.m. Then came another communication, suggesting that because the chief minister had gone to Delhi, the meeting might be held with the chief secretary “On Tuesday evening, Mr Dallewal told reporters.

He claimed that meeting with a government official would not resolve the demonstrators’ grievances.

“It is our warning that if Chief Minister Mann does not meet with us tomorrow and discuss our grievances, we will be forced to march forward (break barricades to enter Chandigarh),” Mr Dallewal added.

The protesting farmers smashed the first layer of barricades as they marched from Gurdwara Amb Sahib to the other barriers erected by the Mohali Police near the Chandigarh-Mohali boundary.

Mr Dallewal, on the other hand, asked demonstrators not to break the second tier of barricades and instead to begin their demonstration peacefully there.

“You don’t mind bursting through barricades to get ahead. However, we will sit here in silence “Mr. Dallewal explained. “A demonstration will be held here… It reminds me of the Delhi agitation.” “We will win this protest,” stated Bharti Kisan Union (Lakhowal) General Secretary Harinder Singh Lakhowal. He said they had submitted a charter of 11 requests to the Chief Minister on April 17 and Mann had assured them that their issues will be resolved.

But, according to Mr Lakhowal, not a single demand has yet been approved.

Another farmer leader stated that they do not want a conflict with the state government, but that if their grievances are not resolved, they will smash the walls and travel to Chandigarh tomorrow.

Farmers squatted there after being stopped by the Mohali Police, putting their vehicles in the middle of the road. Some of them even began brewing tea there.

Traffic on the Chandigarh-Mohali road near the YPS Chowk had to be diverted to alternate routes by the police.

Malvinder Singh Kang, the Punjab unit’s chief spokesperson, said the state administration is devoted to the welfare of farmers and will fulfil their legitimate requests.

“If farmer organisations want to have a discourse about the farming industry, the state government’s doors are always open,” Mr Kang added.