Farmers From All Across The Country Want Repeal Of Laws, Says BKU Leader Rakesh Tikait 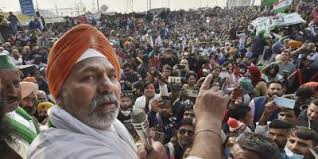 A group of 50 farmers from Karnataka arrived at the Ghazipur border on Sunday, set up tents, and joined the Bharatiya Kisan Union (BKU) and other farm unions to protest against the three farm laws.

Sharathkumar (39), member of the Karnataka Rajya Raitha Sangha (KRRS), said, “We held protests in Bengaluru and Mysuru this month and also attended the mahapanchayat in UP. We are ready to sit with the farmers here… we are all in this together. My wife and my brother are taking care of our vegetable farm.”

The delegation of farmers and leaders from KRRS, led by president Kodihalli Chandrashekhar, met BKU leader Rakesh Tikait and pledged to call more farmers to the protest.

“We can’t stay here for too long; we will have to go back in a month or two. We will then send our brothers here to protest. Our leaders told us to come in batches, else the police or government will target us and stop us from coming here,” said Sharathkumar.

The delegation said it is planning to call over 2,000 farmers from Karnataka to Ghazipur, who will come in small batches via train.

Keshava R, a farmer from Kolar, said, “We have been in Uttar Pradesh for a week now. We are ready to stay here but are waiting for orders from farm leaders. Farmers here to help us with food and offered to give us space in their tractors and tents. Farmers from my village are ready to come here and meet protesters. My brother was beaten up during the nationwide chakka jam in Karnataka… We want fair prices for the vegetables we grow.”

On Saturday, Tikait had said farmers are receiving support from organisations in Maharashtra, Madhya Pradesh, Bihar and Karnataka.

He told The Indian Express, “The government thinks this protest is led by Punjab but that’s untrue. They don’t understand that farmers from other states can’t leave their work and come here. I met with some farmer leaders and they want to come here. I am happy with the support and will soon start a nationwide march to repeal the laws.”

A volunteer from BKU said Chandrashekhar and Tikait spoke over the protests in Karnataka and the farmers who can come to Delhi. “KRRS is with us and wants to send thousands of farmers here. We told them to come in small numbers so that we can make arrangements for them and they won’t face resistance from police,” said the volunteer.