Farmer leaders to address the protestors day after the tractor rally

Union Home Minister Amit Shah held a meeting yesterday evening regarding the deployment of extra paramilitary forces in Delhi and Punjab and Haryana were put on high alert. 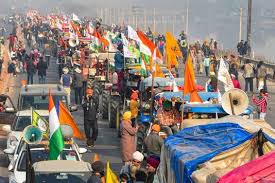 Day after the capital broke out with unprecedented violence today at Delhi-Haryana border the farmer leaders from Punjab will hold an address for protesting farmers. The tractor rally by farmers was scheduled on Republic Day and the rally rolled out into the iconic Red Fort to protest against the center’s agricultural farm laws.

On the way to Red Fort one farmer died and police called it an accident, with this 86 police personnel were also injured and according to Delhi Police around 22 cases have been filed.

The leaders will be addressing at Singhu border this morning after a meeting between these leaders for deciding the further course of action. Following the violence in Delhi Union Home Minister Amit Shah held a meeting yesterday in evening regarding the deployment of extra paramilitary forces in Delhi and Punjab and Haryana were put on high alert.

Internet services were also suspended in some parts of Delhi, Haryana and Uttar Pradesh.

The rally was scheduled to be after Republic Day parade which was around 11:30 am as per the police permission and were permitted to hold their rally only at the boundary areas but the farmers union Kisan Mazdoor Sangharsh Committee refused to follow the rules as well as the route as thousands entered the national capital and were seen breaking the barricades before the Republic Day parade.

Major violence had erupted at Delhi ITO where the police headquarters is located and one farmer also died at the location when his tractor overturned on the way to Old City, the police said. Police used teargas shells in Nangloi during the clash between the police and the protestors. A bus was also vandalized in the clashes near Akshardham and many metro station were shut down in the capital.

The farmers have been protesting for around 60 days now, their Key demand is an assurity of MSP. A pan-India farmers’ group, Samyukt Kisan Morcha called off the rally by the yesterday evening.

Total eleven rounds of talks between the Kisan Unions and the government have been held since the protests but no conclusion have finalized yet. The farmers have also denied the Center’s offer to put the farm laws on hold till 18 months.

Eleven rounds of talks have been held between the farmers and the government but there been no breakthrough. The farmers have turned down the centre’s last offer to put the laws on hold for 18 months while a special committee conducts negotiations.

Many leaders like Chief Ministers Amarinder Singh and Mamata Banerjee, Congress MP Rahul Gandhi and Delhi’s ruling AAP has condemned the violence on Republic Day by calling it an insult of the constitution,