Facebook said it barred the hashtag by mistake and not at the behest of the government, without elaborating. 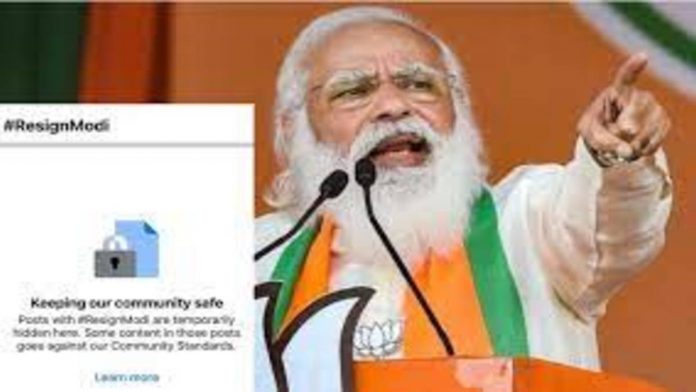 A controvery had erupted after Facebook Inc. blocked posts tagged with #ResignModi over government’s request to block or remove defaming social media content amid the spiralling Covid crisis in the country. However, the posts were restored a few hours later.

In its explanation, Facebook said that the hashtag was mistakenly blocked and not government orders. After the new IT guidelines Facebook periodically block hashtags for several reasons, sometimes manually but sometimes they are automatically blocked as per the new guidelines, said the spokesperson.

The hours-long block, which came before the last phase of Assembly elections in West Bengal and successfully blocked posts demanding Prime Minister Narendra Modi to resign, follows public shock and official endeavors to control content condemning of the manner in which his administration has taken care of the pandemic. This year, the government had set up new IT guidelines to regulate the online content that requires Facebook and Twitter to bring down unlawful content. These guidelines setting off a debate over freedome of speech and expression in the country.

“We temporarily blocked this hashtag by mistake, not because the Indian government asked us to, and have since restored it,” said Facebook spokesperson in a statement.

India is currently facing a secon wave which has crippled India’s health infrastructure that has led into shortage of beds, medicines, vaccines, oxygen. Crematoriums are overrunning as the thousands dying daily. The country has been reporting more than 3,00,000 daily Covid-19 cases from past many days.

People have now started seeking help through their social media handles by pleas of everything starting from beds, oxygen, medicines, plasma, even food for those in quarantine.

On the other hand Twitter Inc. has also either restricted or removed many Covid-related posts over the last month. The social media giant has even blocked more thn 500 hundred accounts for spreading misinformation related to Covid-19 and even on Farmers’ protests despite several government’s warnings.