Exit Polls: Mamata To Struggle In Bengal, Assam To Retain BJP. Know What The States Have In Their Fate 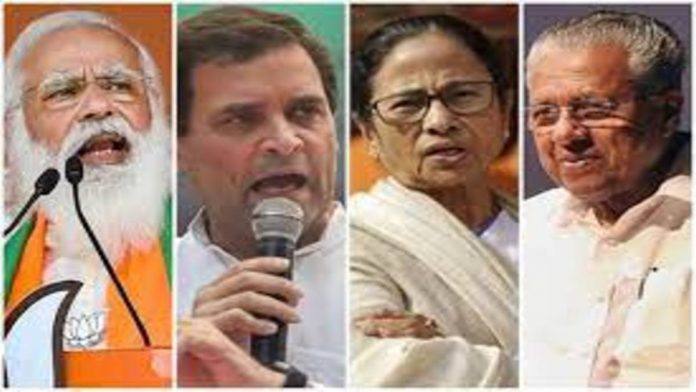 The results for Assembly polls held in five states and UTs in the months of March and April will be declared on May 2. But the exit polls of these five states and UTs — Kerala, Assam, West Bengal, Tamil Nadu and Puducherry have given their verdicts.

According to the exit polls in Bengal the results are not in favour of TMC. The ruling AIADMK in Tamil Nadu is also likeky to lose this time while, in Kerala Cheif Minister Pinarayi Vijayan is seen as resisting the anti-incumbency trend in the state. In Assam there is a positive picture for BJP and in Puducherry NDA led alliance is likely to gain power from May 2.

Here are the complete statewise picture of the exit polls held on Thursday :

As per the exit poll there is an anticipated neck-to-neck rivalry in West Bengal and the political race could any way. The review predicts 130-156 seats for Trinamool Congress and 134-160 seats for the BJP. The Left+ and others should fulfill with 1-2 seats.

In Kerala, the Left-led LDF will hold power in the southern state with 104-120 seats. The Congress-led UDF may get 20-36 seats. This is a positive news for Pinarayi Vijayan, who might have the option to resist the counter incumbency pattern in Kerala to return as state chief minister

After being straight out of power for around 10 years, MK Stalin’s DMK-led coalition (including Congress, Left, VCK, and IUML) is good to go to clear Tamil Nadu polls with 175-195 seats, tells the exit poll predictions. The AIADMK coalition, including PMK and the BJP, should fulfill with just 38-54 seats in the 234-seat assembly.

While the exit poll for Puducherry has anticipated a triumph for NDA in the Union Territory. The collusion partners AINRC, BJP, and AIADMK in Puducherry are required to win 20-24 seats, while the Congress-led alliance may win only 6-10 seats in the 30-seat assembly. AINRC cheif N Rangaswamy is projected to be the cheif minister of the UT.