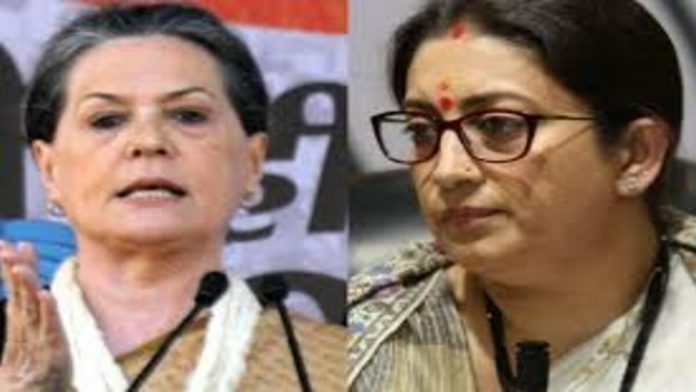 After the incident between the two leaders sparked a political uproar, the Congress claimed that Union minister Smriti Irani heckled Sonia Gandhi and yelled at her while pointing a finger. Many different accounts of the dramatic incident are circulating, the majority of them coming from BJP leaders who assert that Sonia Gandhi rejected Ms. Irani when she sought to interrupt her talk with the BJP’s Rama Devi.

Smriti Irani “acted improperly” with Sonia Gandhi, according to Jairam Ramesh, a Congress MP and the party’s general secretary-in-charge of communications, who made the claim in a statement.

“Sonia Gandhi was speaking with Rama Devi, a BJP lawmaker. Sonia Gandhi was approached by Smriti Irani, who spoke to her in an extremely nasty manner. Smriti Irani yelled, “You don’t know me, who I am,” when Sonia-ji kindly informed her, “I am not talking to you, I am talking to another MP.” The incident was witnessed by Congress members as well as MPs from numerous other parties, according to Mr. Ramesh’s statement in Hindi.

“What sort of conduct is this? Could an MP not even communicate with another MP? Smriti Irani has the political savvy to make her case. Why is she being so disrespectful to a senior MP and the party leader? Ramesh furthered.

Other Congress leaders who were present at the scene assert that Ms. Irani pointed at Mrs. Gandhi and reprimanded her for acting in such a disrespectful manner. Not your party office, this.

The discussion followed a contentious Lok Sabha debate in which Ms. Irani accused Sonia Gandhi of supporting a “Rashtrapatni” statement made by Adhir Ranjan Chowdhury, a member of her party, about President Droupadi Murmu. She had demanded an apology from the Congress leader, branding her “anti-tribal, anti-Dalit, and anti-woman.”

After the meeting was called to a close, sources claim that Sonia Gandhi crossed the floor and addressed Rama Devi, pointing out that Adhir Ranjan Chowdhury had shown regret and asking what she had done wrong. Smriti Irani reportedly tried to intervene at that point by asking, “Madam, may I help you? You gave me your name, Then, according to sources, Sonia Gandhi responded, “Don’t talk to me.”

Mahua Moitra of Trinamool, one of the MPs present during the interaction, stated that Mrs. Gandhi was heckled “pack-wolf manner.”

Disgusted to read BJP lies and fake version in press, she wrote in her post, “Was in Lok Sabha when 75-year-old lady senior politician encircled and heckled pack-wolf manner when all she did was walk over and speak (masked) to another senior lady panel chairman.

In an effort to explain his “Rashtrapatni” statement, Mr. Chowdhury said it was a “slip of the tongue” caused by the language barrier. If Ms. Murmu claims that his statement offended her, he promised to meet her and apologize “a hundred times” to the President.