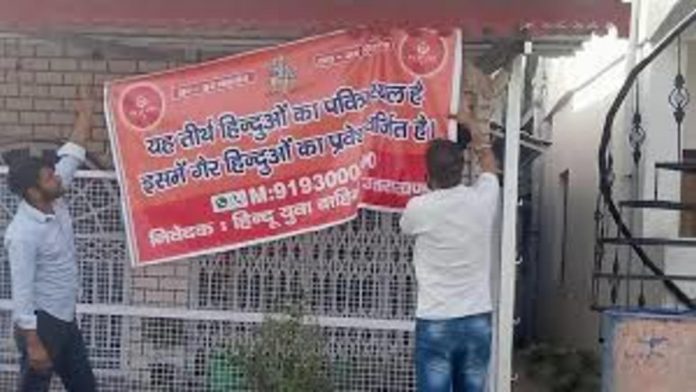 Banners Prohibiting the entry of ‘non-hindus’ in the temples premise have been hanged outside about 150 temples in many parts of Dehradun such as Prem Nagar areas, Suddhowala and Chakrata Road. ”This premise is a holy place of Hindus. Entry of non-Hindus impermissible here,” read the banners.

This move came as a challenge to a Dhaulana BSP MLA Aslam Chaudhry, who announced that he would remove the banner banning the entry of ‘non-hindus’ from temple Dasna Devi in Ghazibad, where a Muslim boy was beaten up for drinking water in the temple premise. The banners outside the 150 temples were put by the members of right winger Hindu Yuva Vahini.

”In order to counter Aslam’s threat, we will now put up such such posters outside every temple in Uttarakhand. The temple is a revered place for people who believe in the Sanatan dharma and hence, only those people who belong to this religion will be allowed inside,” told Jeetu Randhawa, the General Secretary of Hindu Yuva Vahina.

Reportedly, such posters are now being planned for the temples across the state of Uttarakhand.

Later the Dehradun Kotwali Police told that it has registered a case against a person whose number was there on the banners. The case was registered under Setion 153A of the IPC.

This all was started after a video got viral in which a teenage boy was being abused and harshly beaten up for drinking water at the premise of Dasna Devi temple in Gazhiabad. The boy was also questioned for his name and for entering a religious place.