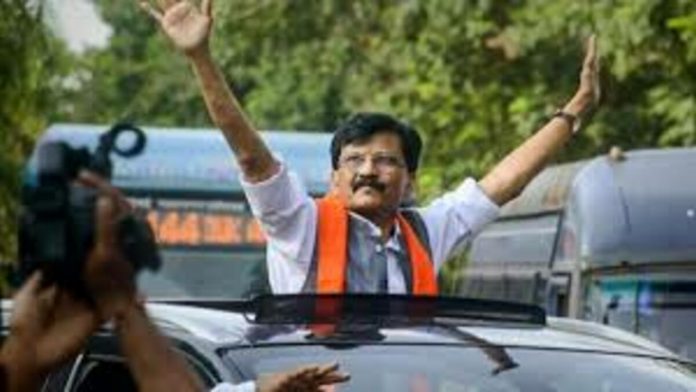 Following a raid at Sanjay Raut’s residence the Enforcement Directorate has arrested the Shiv Sena leader in relation with the Patra Chawl land fraud.
Before the arrest, Sanjay Raut’s brother Sunil Raut was informed by the investigating agency about the arrest.

Mr Raut has been arrested under the Prevention of Money Laundering Act 2002, and will appear in the PMLA court today afternoon.

“The Enforcement Directorate (ED) is scared of Sanjay Raut and that is why has placed him under arrest,” said Sunil Raut after Sanjay Raut’s arrrest.
He further said that the documents were bogus and there is no link between Sanjay Raut and the Patra Chawl fraud.

On Sunday morning, the ED went to Mr Sanjay Raut’s residence to conduct raid and later on arrested him after hours of searching.

The agency started questioning him from 7 pm yesterday.

Sources from ED told that Mr Raut was not at all cooperative with the agency officials and he even sought time till 7 August citing that he is a sitting MP.

However, the claims of non-cooperation were refuted by Mr Raut’s brother Sunil Raut.

“We have let them look into all corners of our house. Accusations of non-cooperation are false,” said Mr Sunil.

Meanwhile, Sunil Raut even alleged that ED arrested Sanjay Raut because of his closeness to Maharashtra ex- chiefinister Uddhav Thackeray.

During the raid on Sunday, the investigating agency recovered a total worth ₹ 11.50 lakh from Sena MP Sanjay Raut’s residence.