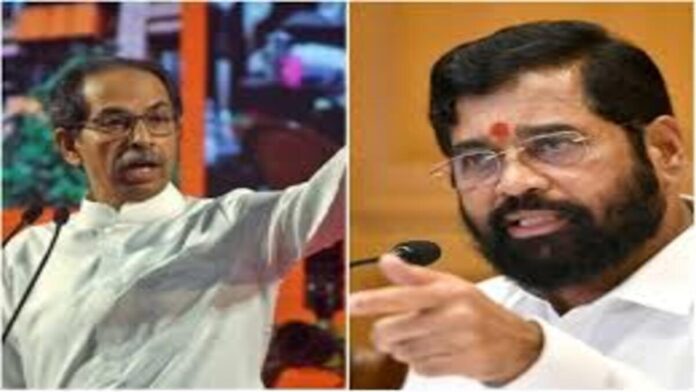 The Election Commission (EC) hearings were ended on Friday with Uddhav Thackeray and Eknath Shinde claiming to represent the genuine Shiv Sena. At the conclusion of the hearing, the EC instructed both camps to submit any written submissions by January 30. According to the Hindustan Times, the EC is anticipated to issue a final ruling in February.

The issue of Uddhav Thackeray serving as the party president has come up in between. Thackery’s tenure as party president will finish on January 23 before a written submission is due by January 30.

According to the report, Sena UBT has asked the EC to permit the party to organise internal elections or to retain the status quo in order to keep Thackeray as party president, but the EC has remained silent.

Anil Parab, the party’s leader, responded that Thackeray will continue in the position as party president because the ECI had not issued any particular instructions on it.

“Uddhav Thackeray is and will be the Shiv Sena party president for party workers and leaders,” he declared to the media “as stated.

“For party workers, there is no requirement of any permission,” he continued. We merely asked for the ECI’s approval to follow the rules and regulations.”

Since the 2018 National Executive meeting, according to Parab, no one has questioned Uddhav Thackeray’s reelection.

The Mukhya Neta (Chief Leader) post is not included in the Shiv Sena constitution, he continued. Therefore, CM Eknath Shinde’s election to that position by himself is illegitimate and unconstitutional. The party is still united, and we will continue to use the bow and arrow symbol and party name.

The Eknath Shinde faction of the Shiv Sena earlier on January 10 asserted claim to the organisation formed by Balasaheb Thackeray by citing a 1971 Supreme Court decision that recognised a group led by former prime minister Indira Gandhi as the original Congress.

“Before the Election Commission, we cited the Sadiq Ali ruling. The true test is whether or not we have the majority “According to Jethmalani, 40 of the Sena’s 56 MLAs and 13 of the party’s 18 Lok Sabha MPs back him.

The Supreme Court’s Sadiq Ali decision discusses a case in which the Congress split after the then-prime minister Indira Gandhi made sure that the official party nominee lost the 1969 presidential election. The supreme court had maintained the EC’s right to make decisions on a political party’s electoral symbol.

“Our counsel claimed that the party is not just MPs and MLAs but also comprises of the National Executive and the party organisation, and that we have the majority in this,” says Parab in response to this.

He further added, “The Shinde faction cited the Sadiq Ali case, but we told the ECI that only when there is an equal split in the party are the number of elected representatives taken into consideration. In this case, there has been no split; some members have defected. The party organisation is with Uddhav Thackeray.”

After overthrowing the alliance led by Uddhav Thackeray in June 2022, Shinde had left the Shiv Sena and was supported by the Bharatiya Janata Party (BJP) to become the chief minister of Maharashtra. Since then, the Sena’s Shinde and Thackeray factions have been engaged in conflict over who will lead the group.

The Sena groups were ordered to present new documentation to support their claim to the party name and election symbol by the EC in November of last year.

Additionally, the commission had requested that they exchange the records that had been sent to it.

The commission had prohibited the two factions from use the party name or its “bow-and-arrow” symbol in an interim order issued in October.

Later, it had given the Thackeray side the party name “Shiv Sena-Uddhav Balasaheb Thackeray” and the Shinde faction the name “Balasahebanchi Shiv Sena” (Balasaheb’s Shiv Sena).

The interim order will be in effect “until the final conclusion of the dispute,” according to the EC.

Sanjay Raut, however, stated on Tuesday that the EC shouldn’t make a decision about the party’s election emblem until the Supreme Court has rendered its decision over the disqualification of 16 rebel MLAs from the camp of Maharashtra Chief Minister Eknath Shinde.

Raut stated there is no division inside the Shiv Sena when speaking with media.

“Those who have triumphed using the Shiv Sena’s emblem have divided (off). This does not indicate a split within the party. This seeming separation is really an illusion. Despite the departure of a few MLAs and MPs, the party has not changed “said he.

He said that the EC shouldn’t rush to make a conclusion on the issue (poll symbol) before the top court issues its ruling on the MLAs’ disqualification.

In relation to the political situation in Maharashtra brought on by the Shiv Sena’s split, the Supreme Court had previously announced that hearings on a number of cases, including the one calling for the disqualification of 16 Shiv Sena MLAs from the Shinde camp, will begin on February 14.