DM BULANDSHAHR IN SHEER VIOLATION OF COURT ORDERS IN THE ADJUSTMENT OF TEACHERS ISSUE! 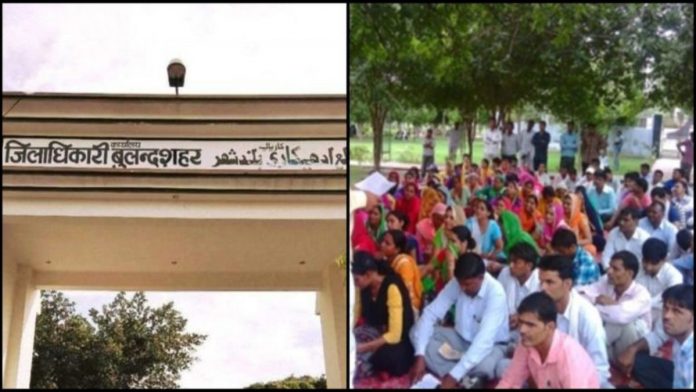 Do the courts have any meaning for the high and mighty IAS officers and how does the court see deliberate violation of its orders by IAS officers?

In a shocking development, it has been reported that DM Bulandshahr in sheer violation of the stand taken by the counsel for the state of UP has issued orders for adjustment of teachers on the basis of a notification which has already been withdrawn.

Adjustment of teachers is the process whereby surplus teachers are being transferred from one school to another on the basis of teacher-student ratio. In State of UP, it was a practice that the junior most teacher was transferred wherever the student teacher ratio was less. In the year 2019 the adjustment of teachers were being carried out on the basis of students present during mid day meal of a single day in pursuance to notification DT.17.06.2019.

This notification was affecting the life of a lot of teachers adversely. Being aggrieved by the aforesaid notification the teachers filed writ petition before Luck now bench of Allahabad High Court. The court granted stay and hence the process of adjustment got stayed. The final hearing of the matter was held on 10th of March 2021. The counsel appeared on behalf of the State of UP and stated before the court that the notification dated 17.06.2019 was withdrawn by subsequent government order dated 09.09. 2019 hence the apprehension of the petitioner of the being transferred is baseless. It was further contended by the counsel for the state that there is no policy at present for adjustment of teachers.

In light of the aforesaid submissions the writ petitions filed by the petitioners was disposed off. Immediately thereon, the DM Bulandshahr in sheer violation of the stand taken by the counsel for the state of UP issued orders for adjustment of teachers on the basis of notification dated 17.06.2019 which has already been withdrawn. The Teachers are forcefully and illegally being relieved and now they are being pressurized to join their new place of posting. This is sheer highhandedness when infact this process is not being carried out anywhere in state of UP except in district Bulandshahr.

Such matters are being reported from many quarters that the buerocracy is not complying with court orders. It was noted by the Madurai Bench of Madras High Court, in a recent order, that any officers should be punished severely, if they do not comply with court’s directions but even then such vehement overrule of court orders is still prevalent.

In view of all these facts, the education minister, education secretary and the chief minister Yogi Adityanath ji should take adequate action against this harassment of teachers who are already facing tough times in the pandemic. However, it just seems the start of a long and arduous journey against the powerful IAS lobby.