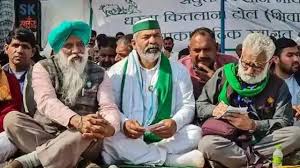 Protesters at the Singhu and Gazipur borders have started dispersing from the protesting sites. The site is being cleared as now the protests against the Centre’s new farm laws have entered its 83rd day without any breakthrough. From thousands protesting a month ago, only half of them are remaining as farmers have started going back to their villages.

When protesters were asked about whether the protests are ending, they answered that this is going to be long battle and having less crowded protesting sites is the part of their new strategy.

The focus of the farmers now lies in holding big rallies across states to gather support for their agitation. The Bharatiya Kisan Union (BKU) leader Rakesh Tikait has decided to attend several Mahapanchayats in upcoming 10 days in Maharastra, Rajasthan and Haryana.

The two side talks between farmers and the government have been at the dead end as neither side is ready to step down. The farmers have also denied to accept the government’s 18 month freeze on farm laws proposal.

“What if 10 lakh people gather here? Will the government take back these laws? We will protest in the entire country, in all the districts our people are spreading. Meetings are taking place,” said BKU leader, Rakesh Tikait.

“At first, the agitation was centralized at the borders, keeping in mind the stubbornness of the government,” said Jagtar Singh Bajwa, a spokesperson of the Ghazipur Protest Committee. “The farmer leaders are changing their strategy as well, so that the  protest can reach every house in every village. We are holding Mahapanchayats at different locations,” he added.

“We need to utilize the energy of the youth, so while spreading the word, the farmers can also carry on with their work. Now it is not just the border but a farmer in his field is also equally part of it,” Bajwa added.

Farmer leaders also claim that farmers are always available to arrive at the borders within a short notice. “At the Ghazipur border, whenever we need numbers. 1 lakh people can come within a day,” added Mr Bajwa.

“In Punjab, Haryana and other places there have been smaller agitations. Now they are intensifying,” said Sandeep Pandey an activist and Ramon Magsaysay awardee.

“Decentralization is happening, rallies happening in Bihar, farmers of eastern Uttar Pradesh, Awadh, can’t come on tractor so we are planning smaller events there as well,” Pandey added.

Punjab and Haryana have been the epicentre of these protests However, protests were seen at some extent in other states of Tamil Nadu, Uttar Pradesh, Rajasthan, Madhya Pradesh, Maharashtra and Uttarakhand.