Diljit Dosanjh calls out Kangana for her recent remarks during an interview to a news channel. 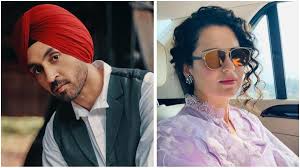 From farmers’ protests to Actress Kangana Ranaut’s recent interview, Actor-singer Diljit Dosanjh and Kangana Ranaut are on heating debate on twitter. Ranaut made a few remarks on Diljit in her interview to a news channel.

Racting to Ranaut’s remarks Diljit called a ‘Drama’. He also took to his twitter responding to the actor saying how she made him to say that he is ‘not a Khalistani’ but he did not say. There were many other things he tweeted.

“They sit on TV and call themselves patriots. They speak like the whole country is in their hands. Punjabis have given their lives for the country whenever the need has risen. God forbid if there is a need for it today, we will do it again. And these Punjabis prick your side so much?,” Diljit tweeted in Punjabi.

In another tweet he wrote, “”TV interview: ‘You ask me this, I give you this answer.’ What is this drama? They talk about the country, about Punjab. They want to push the debate to another angle. You want to project us however you want. Wow”.