The AIMIM had said that they were invited to the DMK’s minority conference in January but the DMK distanced itself. 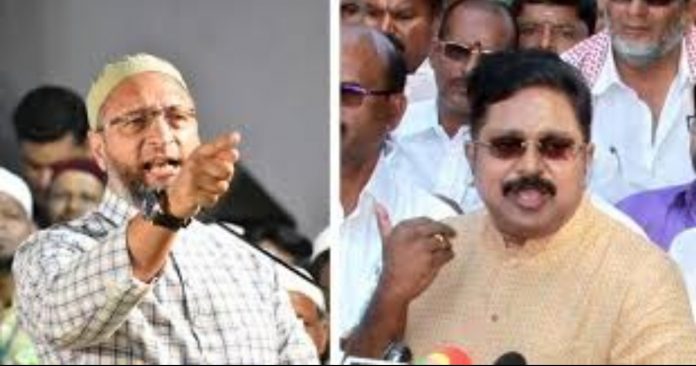 All India Majlis-e-Ittehadul Muslimeen (AIMIM) led by Asaduddin Owaisi’s has formed an alliance with Amma Makkal Munnetra Kazhagam (AMMK) led by TTV Dhinakaran for the upcoming elections in the state of Tamil Nadu. AIMIM has been alloted three seats by AMMK, which include Sankarapuram, Vaniyambadi and Krishnagiri.

Based upon their performance in Bihar elections last year, Owaisi had planned a mega conference in Chennai, which however did not take place.

The alliance of AIMIM with Dhinakaran is nothing as unexpected as there were rumours of Owaisi’s frequent communications with actor-politician Kamal Haasan’s Makkal Needhi Maiam. In 2016 also AIMIM had fought elections from Vaniyambadi constituency, but it did not win.

TTV Dhinakaran, is an MLA from RK Nagar constituency in Chennai. He is Chief Ministerial candidate for AMMK.

Tamil Nadu will go under polling in a single phase on April 6, of which counting will take place on May 2.