An FIR was registered against "pro-Khalistan" and the creators of the "toolkit" for carrying on a "social, cultural and economic war against the Government of India". 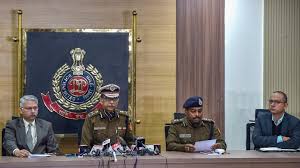 A team of Delhi Police wrote to Google and some social media giants asking them to provide details of certain social media accounts and some email IDs and URLs releated to creators of a “toolkit” posted by the school drop out climate activist Greta Thenberg on her social media. The “toolkit” had information relating to the ongoing farmers’ protests and the global conspiracy behind it.

An FIR was registered against “pro-Khalistan” and the creators of the “toolkit” for carrying on a “social, cultural and economic war against the Government of India”.

The Deputy Commissioner from Cyber Cell in Delhi Police Anyesh Roy told, a letter was written to Google and some social media giants asking them about the people who created and uploaded the toolkit and other such documents over social media platforms.

Mr. Roy said that the Delhi Police is waiting for the details from concerned social media platforms and google so that the further investigation can be proceeded.

A senior police officer said that the document was edited and pushed by some people and it is important to know about them for the further investigation and also the document had information about the hidden conspiracy.

The FIR is lodged with various charges of criminal conspiracy, sedition and some other charges as per the sections of Indian Penal Code.

As per the estimations by the Senior Police Officer on the basis of initial investigation into the matter it suspects the document linked with “Poetic Justice Foundation” which is a pro-Khalistan group.

He also said keeping in the mind the events which took place since 26 January, including the violence on Republic Day, it has revealed “copycat execution” of the action plan mentioned in the ””toolkit”” which was also aimed at carrying out “a social, cultural and economic war against the Government of India.”

According to the Police, the document aimed at defaming the Indian government and inciting disharmony between various religious, cultural and social groups.