Delhi Fortified With 50,000 Personnel And Water Cannons Against The Chakka Jam

Many more bunches have been called by the top farmers' union the Samyukt Kisan Morcha (SKM) to protest and demand for the repealation of the three farm laws. 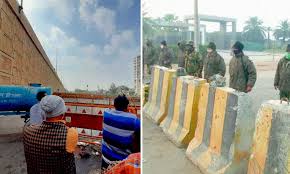 Farmer protesters are set to observe a three hour chakka jam today in the country in their demonstration against the three farm laws and get them repealed. The jam will take place all across the country except the main city, Uttarakhand and Uttar Pradesh. This is another big step taken by the protesters after the tractor rally on Republic Day which erupted an unprecedented violence in the national capital.

Authorities are fully aware this time and have secured the national capital in a bid to avoid any major disruptions during the protests.

Many more bunches have been called by the top farmers’ union the Samyukt Kisan Morcha (SKM) to protest and demand for the repealation of the three farm laws. The chakka jam would be observed in noon on major national and state highways of the country.

“There will be no road blockade in Uttar Pradesh and Uttarakhand tomorrow; roads will be blocked in rest of the country excluding Delhi. The reason is that they can be called to Delhi any time, so they are kept on standby,” said the Bharatiya Kisan Union (BKU) leader Rakesh Tikait.

However, extra security has been deployed and barricades strengthened, that may potentially lead to traffic jams on many key Delhi roads, with this many substantial measures have been undertaken at the Ghazipur border also with deployment of water cannon vehicles.

Approximately Around 50,000 police, paramilitary, and reserve forces personnel have been deployed overall in the Delhi-NCR region and around 12 metro stations are on high alert.

The Delhi Police spokesperson Chinmoy Biswal said that the police is alert on social medias to track all the rumours and will act against those posting or sharing them.

“We are in touch with the police forces of other states also,” said Biswal. Internet services have also been suspended in the three main protesting sites of Ghazipur, Singhu and Tikri.

The farmers have been protesting at the three sites for over 70 days now and the farmers are mostly from Haryana, Punjab and Uttar Pradesh.

Meanwhile, the United Nations have asked both the authorities and protesters to maintain maximum self control during the whole demonstations.