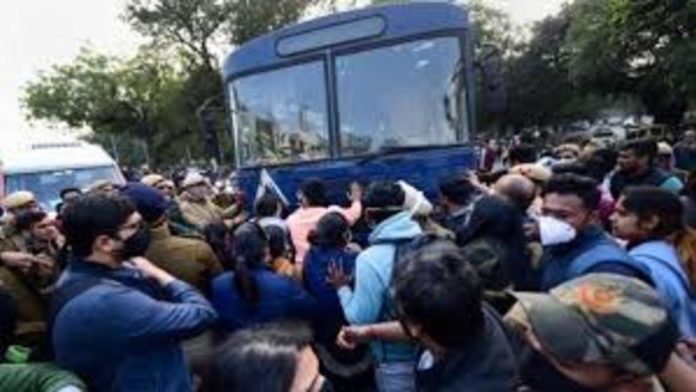 After the violent attack of police on their protest against the delay in college allotments after the NEET postgraduate exam, resident doctors’ groups have warned of complete shutdown of all medical services in Delhi on Monday.

According to rhe Federation of Resident Doctors’ Association (FORDA), which is heading the protest for a month now told that around 4,000 of its members have ended their sit-in at the Sarojini Nagar police station to follow the protocols of imposed night curfew in the national capital. They complained on Monday that they were asked to stop their march towards the Health Ministry’s offices.

In their support to the FORDA, both the Federation of All India Medical Association (FAIMA) and All India Institute of Medical Science (AIIMS) have said that all the RDAs and all other doctors’ associations across the country should come together to completely shut down their non-emergency medical services from Wednesday, if no response is received in next 24 hours.

The medical fraternity has called it a “black day”, as many women doctors alleged thate they were manhandled during their march which turned into a violent face off between the doctors and the police.

Alleging that they are working over their working capacity and they have been demanding for new recruitment of doctors, which has been on hold since a year as they said the Supreme Court is hearing a case involving reservation in medical admissions.

Meanwhile, the FORDA president Manish Nigam told that the resident doctors of a large number of hospitals have ” returned their apron (lab coat) in a symbolic gesture of rejection of services on Monday”.

“We also tried to march from the campus of the Maulana Azad Medical College (MAMC) to Supreme Court, but soon after we had started it, security personnel did not allow us to proceed,” said Nigam.
Some junior doctors were injured during the clashes with the police as they tried to resort the force, he further said.

But the police has denied the allegations of using force and abusive language against the protesters and said only 12 protesters were arrested and were released later.

“We spoke to the association members and tried to sort out the issue, but they continued to block the roads,” said a police official.

The police even alleged that the protesters even tried to tear the uniform of the police officials and that they vandalized the police vehicles and misbehaved with them.soon

While, the resident doctors’ association said that they will be forced for “mass resignation” if their demanda are not met soon.