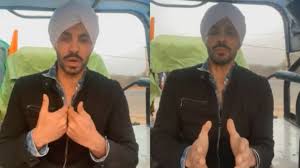 The Punjab actor Deep Sidhu has finally open his mouth over the allegations levelled on him. Going “live” on social media to refute allegations levelled by Sanyukt Kisan Morcha (SKM) that he demeaned the farmers’ stir by fomenting violence, actor-turned activist Deep Sidhu on Thursday said its leaders wouldn’t know where to hide if he started revealing “their secrets”.

“You’ve shamelessly blamed me. People came (for the tractor parade in Delhi) with resolve based on your decision. People followed your words. How could lakhs of people be in my control? If I could provoke lakhs, then where do you stand? You had been saying Deep Sidhu has no following and no contribution; then how do you claim I took lakhs of people there,” Sidhu, who claimed he was still near the Singhu border, asked on Facebook Live around 2am.

Sidhu, who has been named in Delhi Police’s FIR in connection with the rioting at Red Fort on R-Day, said the only reason he was holding back from revealing more was his commitment to the goal of the farmers’ agitation — to get the new farm laws repealed. Denying that there was violence at Red Fort, he said the protesters who were there deserved support rather than condemnation.

On the SKM leadership’s allegation that he was an RSS agent, he said, “Will an RSS or BJP stooge fix the Nishan Sahib there or somebody who wishes to fight an election? You are, in fact, branding as traitors all those who reached there. It brings out your bad intention.”