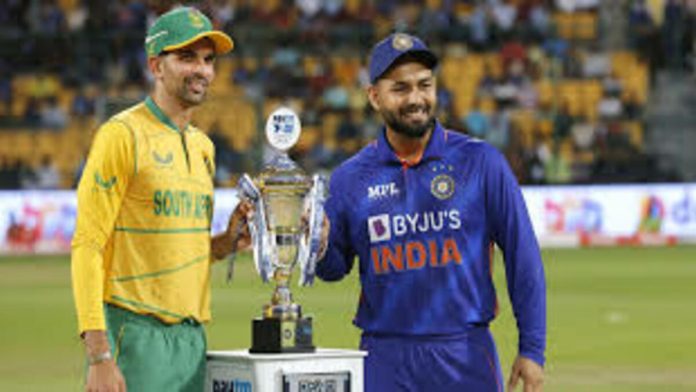 The 5-match T20I series was set up for a perfect finish in Bengaluru on Sunday, but weather intervened, and the two teams were forced to share the trophy when the series ended 2-2. After only 3.3 overs of play, the fifth and final T20I was called off at 9:40 p.m. IST.

Even as cricket fans waited patiently in the stands at the renowned M Chinnaswamy Stadium, the play could not be resumed on Sunday due to a steady precipitation. Rain caused the 5th T20I to be delayed by 50 minutes after a spell of showers after South Africa won the toss and chose to bowl.

After Keshav Maharaj, who came in for an ailing Temba Bavuma, chose to bowl, Lungi Ngidi got rid of the two India openers, Ishan Kishan and Ruturaj Gaikwad, early in the 3.3 overs. Rishabh Pant, India’s stand-in captain, had lost the toss in all five matches, and a no-result in the last T20I would have upset him, especially after coming back from a 0-2 deficit in his first term as captain.

Ishan Kishan blasted two massive sixes in the first over of the match, bowled by left-arm spinner Maharaj, as India got off to a flying start. With a slower delivery, Lungi Ngidi uprooted the stumps and claimed the big wicket of the in-form opener for 15 (7 balls).

With another slower delivery, Ngidi removed Ruturaj Gaikwad in his second over for just 10 off 12 balls.

Rain stopped play before the match was called off, and captain Rishabh Pant joined Shreyas Iyer in the middle.

After losing the first and second T20Is at New Delhi and Cuttack, India fell to 0-2 in the series. Pant’s team, on the other hand, bounced back in the next two matches, winning convincingly in Visakhapatnam and Rajkot.

Dinesh Karthik's big smile was a staple in India's training session at the Arun Jaitley Stadium in New Delhi ahead of the first T20I...
Read more
SPORTS