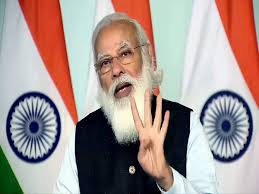 In his visit to Assam Prime Minister Narendra Modi on Monday indicated the chance of the Election Commission declaring elections dates for four states — Assam, West Bengal, Tamil Nadu, Kerala — and the Union Territory of Puducherry early in the March first week.

“In 2016, assembly poll dates were announced on March 4. This year, it is my assumption that the EC will announce the dates by March 7,” said the prime minister on his third visit to Assam, which is also one of the states who are having elections in near months.

Later the PM Modi also visited to Hooghly in Bengal, there he talked about “ashol parivartan (real change)”. Sources said the schedule for the state may be announced after Modi holds a rally at Kolkata’s Brigade Parade Ground right on time one month from now. The rally will constitute six “parivartan yatras” of BJP all across the state.

In Assam’s Silapathar, the PM devoted three energy framework projects in the state worth over Rs 3,000 crore to individuals. He additionally introduced the state’s seventh engineering college at Dhemaji and established the framework for the development of the eighth such college at Sualkuchi close to Guwahati.

During his address at Dhemaji, Modi alleged the previous governments for treating the district “in a stepmotherly way”. “Those who ruled the country for decades had considered Dispur far from Delhi. This thinking caused a lot of loss to Assam. Now, Delhi is not far from you. Delhi is standing at your door,” said the PM.

Modi also said that the Union Ministers anyway used to make visits to take note of the situation and the problems faced by the people of the state and the work done by the government. “I, too, have come to Assam many times so that I can be among you and become a participant in your development journey. Assam has everything that every citizen needs to live a better life. Now, the need is opportunity for development. The double engine that is running has to be strengthened. I assure the people of Assam that with your cooperation, and your blessings, there will be development at a faster pace.”

He also said that he wanted to make a lot more visits. “My efforts will be, assuming the election dates are announced by March 7, to come to Assam and go to West Bengal, Kerala, Tamil Nadu and Puducherry as much as possible till then.”

A week ago, Modi had launched various street, water and advanced availability projects worth Rs 9,500 crore remotely in Assam.