Congress Fails To Prove Its Majority In Puducherry, CM To Resign

The elected Lieutenant Governor Tamilisai Soundararajan ordered for a floor test on Thursday citing the possibility of Congress-led alliance's lack of majority. 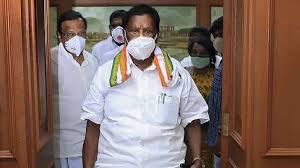 In the floor test the Congress-DMK alliance has collapsed due to the short number of MLAs after two other MLAs resigned yesterday each from Congress and the DMK. The majority fall was up to 12 members where 14 is the majority mark. The ruling Congress Chief Minister V Narayanswami will resign from his post.

The Chief Minister accused former Lieutenant-Governor for partnering with the opposition to topple his government as always depolarizing every step of his government. He also said that Bedi could not topple as the members stood committed to the alliance.

The two MLAs who resigned yesterday were DMK’s K Venkatesan and Congress’s K Laxminarayanan. Laxminarayanan cited a reason of not getting recognition in his full four years of tenure in the party, he was never made any speaker, minister or any party chief.

The elected Lieutenant Governor Tamilisai Soundararajan ordered for a floor test on Thursday citing the possibility of Congress-led alliance’s lack of majority. She too charge of the Lieutenant-Governor after the former Lieutenant-Governor was removed by the President.

Kiran Bedi was removed in the wake of Congress crisis in the Union Territory. The crisis originated with four resignation from the Congress-led alliance. Out of those four MLAs who resigned two of them joined BJP. But the alliance faced a big jolt yesterday when two more resigned just a day before the floor test.

After failing to prove the majority the Chief Minister V Narayanswami alleged the BJP government for toppling his government. He also said that the BJP has used the “Operation-Kamala” which is the name given by BJP itself for the plan of toppling government.

Now two possible outcomes are likely to be happened in Puducherry. The Territory may either go under the president rule or the Governor will ask NR Congress to form its government temporarily as the Union Territory is going to have its elections in May.

Now BJP can also be the part of the ruling government if the NR Congress forms its government in the Territory.

This was the only ruling Congress in south. The BJP is going to be benefit in the upcoming elections in the Union Territory as well as the adjacent states of Karnataka and Tamil Nadu.