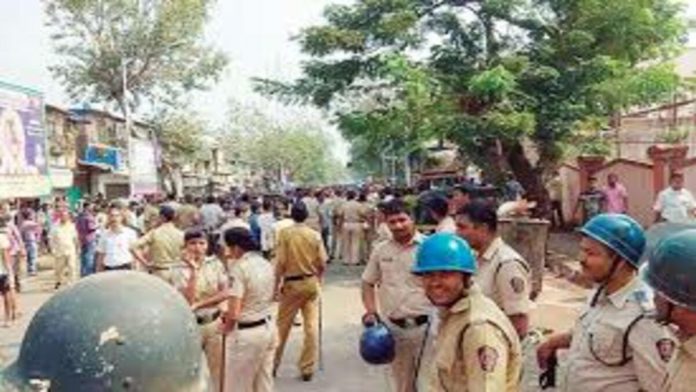 Fresh skirmishes erupted in Jodhpur’s Jalori Gate neighbourhood on Tuesday after morning prayers, hours after a clash between members of two communities over hoisting and removing a flag from a freedom fighter’s statue developed into stone pelting and resulted in the injuries of a few police officers.

On Tuesday, Chief Minister Ashok Gehlot presided over a meeting to assess the situation, following which a curfew was imposed in the region covered by 10 police stations in Jodhpur. Senior Rajasthan government officials, including assistant chief secretary Home, ADGP Law and Order, and MoS Home Rajendra Singh Yadav, were flown to Jodhpur by helicopter.

To put the situation under control on Monday night, police had to use lathi charges and tear gas shells. The district’s internet services were also turned down.

The situation has been brought under control, according to Dinesh Lakhawat, the Sardarpura police station’s station house officer (SHO).

According to the police, the skirmishes began late Monday night over some flags that had been displayed in honour of Parashuram Jayanti, which falls on the same day as Eid. “There were Lord Parashuram flags near the namaaz offering spot. “There was a disagreement on removing the flags because the local Muslim community puts up a flag on Eid,” said Hawa Singh Ghumaria, Additional Director General (Law and Order).

Due to the proximity of the Eidgah and the prospect of a large number of Muslims performing namaaz in the vicinity on Eid, the police commissioner intervened and prohibited the crowd from approaching the Eidgah. “However, as people dispersed, tensions rose and stone pelting occurred,” Ghumaria continued.

“It’s terrible that a dispute between two groups in Jodhpur’s Jalori Gate has resulted in tension. I’ve given the administration strict orders to keep the peace and order at all costs. On Tuesday morning, Rajasthan Chief Minister Ashok Gehlot tweeted, “Respecting the history of love and fraternity in Jodhpur, Marwar, I appeal to all sides to assist in maintaining peace and law and order.”

The chief minister’s home district is Jodhpur, and his assembly constituency is Sardarpura (the Jalori Gate area is within the jurisdiction of the Sardarpura police station). Gehlot, who was due to welcome well-wishers at his home on his birthday, cancelled all of his plans to convene an emergency meeting over the incident.

“It is condemnable that rowdy individuals raise an Islamic flag over the statue of independence fighter Balmukund Bissa and remove the kesariya (saffron) flag placed on the occasion of Parashuram Jayanti. It is my wish for everyone to keep the peace. On Tuesday, state BJP president Satish Poonia tweeted, “It is my demand from the state administration that robust action be taken against disruptive individuals, and rule of law be established in the state.”

“It’s not good what’s happened. In Jodhpur, peace and tranquilly had reigned till recently. Suryakanta Vyas, a BJP MLA from Soorsagar, remarked, “Anti-social people should be arrested.”