The state's way behind in its vaccination schedule is one of the issues, which is growing concerns for Centre these days. 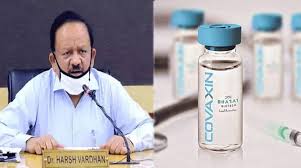 The primary issues issued by Mr. Deo were the inhibitions regarding the “incomplete third phase trials” of the vaccine and the “absence of expiration date on the vials,” he tweeted these issues by attaching a letter to the Centre asking them to “halt the supply of COVAXIN to Chhattisgarh until these issues are addressed”. Not just now the state had expressed its reservations about the Covaxin earlier also.

Apart from explanations Dr. Harsh Vradhan in his letter, also said that the state’s way behind in its vaccination schedule is one of the issues, which is growing concerns for Centre these days.

Covaxin, which was yet to complete its third phase of trials before being approved for use by the country’s drug regulator last month,  is being used in clinical trial mode, meaning its recipients are being monitored. In Delhi, it is being administered to healthcare workers in the six Centrally-run hospitals.

Vardhan in his letter also wrote that, all the vaccines supplied to the state are “safe and immunogenic” and should be used rapidly and efficiently to mitigate the impacts of Pandemic at earliest.

“Your concern regarding unavailability of expiry date on Covaxin vial is also completely unfounded and without basis as the same is mentioned on the label of vaccine vials,” Vardhan wrote with attaching a photo of a vial with label on it.

“You would appreciate that this coverage needs to improve significantly since adequate quantity of both the vaccines are available with the State,” wrote the Union Minister.

Vardhan in his letter in all asserted that the vaccine was approved by due evaluation of data.