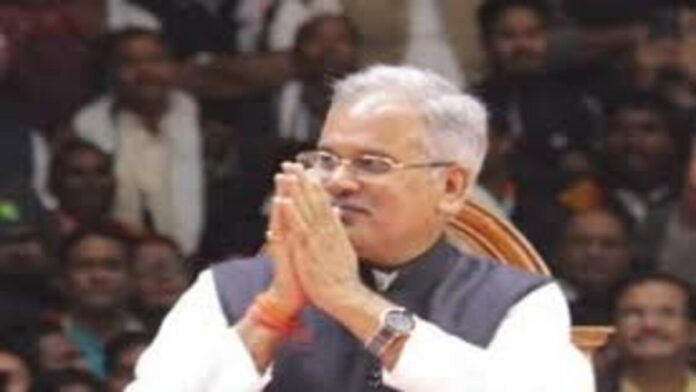 Manendragarh-Chirmiri-Bharatpur and Sakti were formally established as the 32nd and 33rd districts of the state on Friday by Chhattisgarh Chief Minister Bhupesh Baghel, an official said.

The chief minister inaugurated the Manendragarh-Chirmiri-Bharatpur district and performed Bhoomipujan of construction projects worth Rs 200.73 crore at a ceremony held in Manendragarh.

CM Baghel expressed gratitude to the locals for their support, adoration, and joy. He wished the new district well and offered his congratulations.

The long-anticipated demand of the locals has finally been met today, on Day 9 of the ninth month of the year, according to Baghel.

“Chirmiri’s 100-bed hospital will become a district hospital. The Manendragarh Siddha Baba Temple will be further expanded by the Tourism Department, and funds of Rs 3 crore each will be approved for the development of Manendragarh, Chirmiri, and Bharatpur, according to Baghel.

“During our time, we have established 85 tehsils and six districts. We first created the Gaurela-Pendra-Marwahi district, and then five additional districts. To bring government closer to the people, districts and tehsils were established. Governmental initiatives will be carried out more quickly and efficiently the closer they are to the general population in the district, tehsil, and sub-division offices. All segments of society, especially youth, would gain from this, he added.

According to Baghel, the state is making progress toward rapid development.

“Madhya Pradesh used to be our source for electrical supply, but today Chhattisgarh is the power centre. With measures like loan waivers and programmes like the Rajiv Gandhi Nyay Yojana, we have helped the state’s farmers. Chhattisgarh offers the highest price for small forest produce, the chief minister added.

The Chief Minister claimed that in addition to preserving Ghotul and Devgudi in the tribal areas, we have created the Ram Van Gaman Path to promote our traditional legacy.

Currently, 32 Hindi medium schools and 247 English medium schools are operated under the Swami Atmanand Scheme. 422 high and higher secondary schools will receive the Swami Atmanand Utkrisht Vidyalaya designation in the upcoming academic year. To give the youngsters of Chhattisgarh more opportunity for education and learning, the international-level school would be opened in Naya Raipur, he continued.