Both BJP, TMC Asserts To Comfortably Attain The Majority Mark In Bengal Ahead Vote Counting 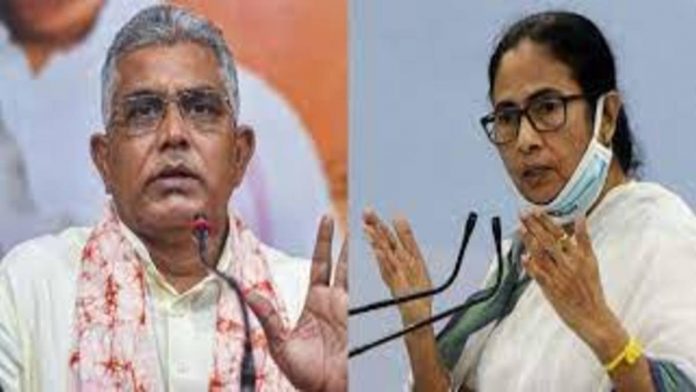 After the exit poll predicted a close fight between the Bharatiya Janata Party and Trinamool Congress in West Bengal, both the parties have challenged to easily attain the majority mark in the state. The vote counting for the state will take place tomorrow with other four states and UTs.

Addressing a meeting of 290 TMC leaders the TMC supremo Mamata Banerjee asserted that her party will win the two two-third of the total votes. She also told the counting agents not to lose their morale even if the opposition is ahead by 1 lakh votes and to stay at the counting centres until the last vote is counted.

“Didi was very confidant of the win. She is expecting good performance in north Bengal and Jangalmahal,” said a TMC candidate after the meeting.

She also told the TMC members not to take any food items from anyone during the counting session. “Counting agents will be given two helpline numbers. They can dial the numbers if they face any problem,” said Mamata Banerjee.

She even cautioned her party members about BJP’s tactics to create confusion at the counting centres.

“Didi said that the BJP controls the media which will prominently show BJP’s leads. But TMC candidates should not lose hope or worry. She instructed us to stay at the counting centre till the last vote is counted and tallied with voter-verified paper audit trail,” another TMC candidate said after attending the meeting.

Calling the exit polls fake the Bengal BJP president Dilip Ghosh said that the saffron party will win up to 200 seats in the state assembly.

However, no exit poll had shown a straight win for BJP in the state as they either showed a win for TMC or a close fight between the two.

“I don’t believe in exit polls. I believe in the exact poll. Some exit polls have shown that the TMC is ahead. Everything will be clear on May 2. What we have said will finally happen. We will win about 200 seats,” said Ghosh.

While in TMC Sougata Roy said TMC will comfortably cross the majority mark. “The exit polls have shown the trend. The TMC will get over 200 seats. Mamata Banerjee will become the chief minister for the third time,”he said.

“We will get a full majority and form the next government comfortably,” said BJP general secretary Bhupendra Yadav.