BKU Leader Rakesh Tikait Questioned Govt, ‘What If It Removed From Power’?

BKU leader Rakesh Tikait questioned the government of what it will do if the youth removed it from power. 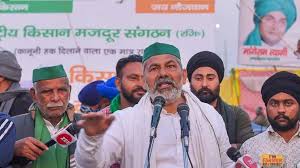 Bharatiya Kisan Union leader Rakesh Tikait on Wednesday questioned the Centre’s adamant behavior over repeal of farm laws and asked, “What will you do if the youth asks you to return your seat [removes you from power]?”

According to reports, nobody was hurt in the stage collapse.

Calling for a “wapsi” (withdrawal) of the three new farm laws, the BKU leader indirectly warned the Narendra Modi government that it could lose its “gaddi” (power) if the agitation continues.

“We have so far talked about “bill wapsi” [repealing the farm laws]. The government should listen carefully. What will you do if the youth call for “gaddi wapsi” [removal from power]?” he said.

Tikait said the campaign against the farm laws was going strong. “The way we are getting support from khap panchayats, we will win this fight.”

He urged everyone involved, particularly the youth, to keep protesting in a peaceful manner.

Tikait underlined the role played by farmers and their unions from Punjab. “We need their help. Haryana and Uttar Pradesh will back them. We will maintain the prestige of the farmer’s turban,” he said.

During the mahapanchayat, the leaders passed five resolutions, including the demand to repeal the contentious farm laws, legal guarantee of the minimum support price for crops, implementation of the Swaminathan Commission report, farm loan waiver and the release of farmers arrested after the Republic Day violence.

The large gathering at Jind’s Kandela village was attended by several khap leaders. The event was organised by the Sarv Jatiya Kandela Khap headed by Tekram Kandela.

The Kandela khap, which had spearheaded a farmers’ agitation in Haryana nearly two decades ago, has lent its support to farmers against the new farm laws.