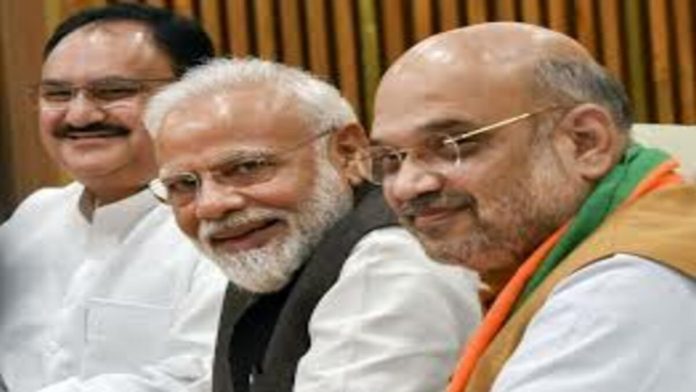 The BJP is already preparing for the Lok Sabha elections in 2024 and will evaluate the four key responsibilities assigned for the elections during this week’s national executive (NE) meeting in Hyderabad.

The four tasks that will be under the spotlight are ‘Modi Ki Toli’ (Modi’s Team) to decide the campaign led by the Prime Minister, widespread messaging of the ‘Modi@20’ book, focus on the 70 Lok Sabha seats that the BJP has never won, and a similar lens on nearly 76,000 polling places across the nation where the party had performed poorly in previous elections.

“The party is fully operational, and the national executive will set the national executive’s course through 2024. We are certain that the nation would again give the Narendra Modi administration a significant mandate in regard to the development platform and the numerous welfare programmes for the underprivileged, a senior BJP leader said News18.

For the tasks, four panels have been set up. Tarun Chugh, a prominent member of the BJP and the national general secretary, is in charge of the “Modi Ki Toli” committee. Prakash Javadekar, a former federal minister, is the chairman of the “Modi@20” committee. The 76,000 or so weak booths spread all across the nation are managed by Baijayant Jay Panda, national vice president. Additionally, veteran politician and government minister Dharmendra Pradhan is leading the committee for the 70 Lok Sabha seats that the BJP has never won.

The “Modi Ki Toli” committee will monitor the Prime Minister’s programmes in each Lok Sabha constituency and organise the campaign ahead of the 2024 elections. A leader claimed that together with other important team members, Modi is the BJP’s top campaign attraction and that the party will continue to capitalise on his enormous voter popularity. The PM’s intricate campaigning and election tour will be handled by “Modi Ki Toli.”

The duty of discussing the PM’s accomplishments and goals for the 20 years that he has led Gujarat and the country has been delegated to the “Modi@20” committee. This will be based on the recently released book “Modi@20- Dreams Meet Delivery,” which featured essays by senior BJP figures like Amit Shah, senior government officials including NSA Ajit Doval, foreign minister S Jaishankar, and a host of other well-known figures from other fields.

“The public must understand what PM Modi did and why. His political vision and resolve affect an entire generation, a BJP leader continued. The team will ensure that every state’s library has a copy of the book, organise debates about the Modi model, and “carry the message to the ground level.”

The party is closely examining the 70 Lok Sabha seats it has never won as there are just two years until the 2019 elections. “This demonstrates the party’s desire to win more seats in the forthcoming Lok Sabha elections than it did in 2019. Many of these seats are in southern and western India, therefore each one will be carefully examined, according to a BJP leader. The party has entrusted federal minister Pradhan, who oversaw Uttar Pradesh’s elections this year, with the task of handling those difficult seats and winning them in the 2024 elections.

The party has noted 76,000 booths where it did poorly while developing a plan to boost the organisation at the local level. These booths were either never won by the party or were won by a very small margin. Panda’s job is to visit these booths, attend regular briefings, and guarantee improved performance. A leader stated, “This will further strengthen the party from the grassroots up.”

According to sources, a significant portion of the debate during the national executive conference will centre on how these committees function in addition to any organisational decisions that will be made.