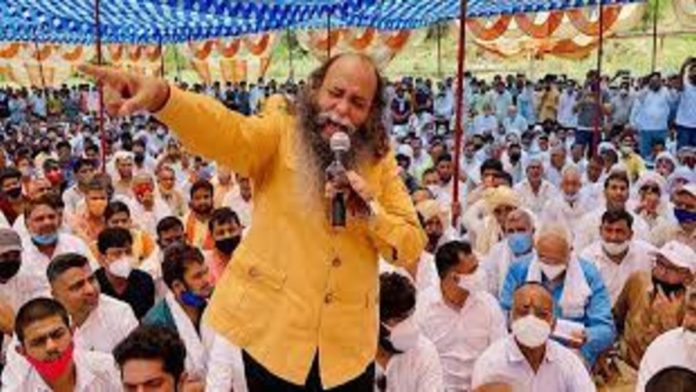 Suraj Pal Amu, Haryana BJP spokesperson and Karni Sena president, urged a mahapanchayat in Gurgaon’s Pataudi to “create history” rather than “become history” so that “no Taimur, Aurangzeb, Babur, or Humayun” be born.

“Agar Bharat hamaari maata hai, toh Pakistan ke hum baap hain, aur ye Pakistani… ko hum yahan ke gharon mein kiraye par makan nahin denge… In…ko is desh se nikaalo, yeh prastaav paas karo (If India is our mother, then we are the father of Pakistan, and we will not give houses here on rent to the Pakistanis… Remove them from this country, pass this proposal),” said Amu.

The mahapanchayat was convened to discuss religious conversion, so-called “love jihad,” and a population control law. “During 1947, the country was divided, we saw the bodies of 10 lakh people… there is no tally of those bodies till today. And we are giving them houses and shops, and it has been found in Pataudi their parks have started being built. Uproot the stone of the park… which youth are ready to uproot the stone?” he said.

“These were his own comments,” a top BJP politician from Haryana stated when asked about Amu’s remarks. “It has nothing to do with the party.”

In 2013, Amu was appointed Haryana BJP spokesperson, and from 2014 to 2019, he served as chief media coordinator. On June 11, he was re-appointed as the BJP’s Haryana spokesperson.

In the run-up to the release of their film “Padmaavat,” Amu sparked controversy by announcing a bounty of Rs 10 crore for anyone who could behead actress Deepika Padukone and director Sanjay Leela Bhansali.

Speaking on Sunday, Amu said, “I was remembering Suraj Pal Singh from Ujjina, who did not allow a masjid to be built inside his village. A youth was telling me, in Bhodakalan a masjid is being built again and again, they stop it, then it is built again… finish it from the foundation.”

Amu, while speaking the mahapanchayat, targeted star Saif Ali Khan and his family, “They say (there is) love jihad in Pataudi, those who gave birth to Taimur are also from Pataudi… Thakur sahib is sitting here, when the Nawab of Pataudi died, he was the one who tied the turban… while we know how to give respect, we want to request Taimur’s mother also, enough. This love jihad has been happening from the time of Sharmila Tagore, the seed was sown in Pataudi itself, people of Pataudi, only you will cut it. Stop welcoming them.”