BJP Releases Its Blue-Print For Seat Sharing In Assam

The AGP may split if Mr Mahanta does not get ticket, said the sources. 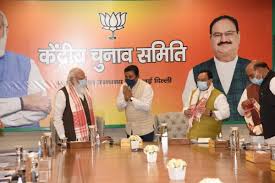 BJP on Thursday has finalized a blue-print for seat sharing with its allies in Assam for the three phase assembly elections starting from March 27.

The saffron party is going to contest on 92 out of total 126 Assam assembly, 26 of them would be reserved for Asom Gana Parishad (AGP) and 8 for the United People’ Party Liberal (UPPL), said the sources.

A list of candidates for 84 seats is finalized and names for the remaining seats are likely to be finalized by today, said souces.

The sources also told that a local party will also ally with BJP and one or two members of that party will contest with BJP name.

Sources from AGP told, the two-time former Chief Minister and six-time MLA Prafulla Kumar Mahanta has not been yet given a ticket.

However, Mr Mahanta is currently under treatment in Delhi.

The AGP may split if Mr Mahanta does not get ticket, said the sources.

BJP had won in the last elections by winning 60 seats out of 84 on which it contested in 2016, AGP won 14 of 24 whereas, UPPL failed all the four it contested.

The seat sharing for Assam comes after a meeting of BJP’s Central Election Committee held in Delhi to decide the candidates for the first two phases of elections in both the Assam and West Bengal. Several leaders including Agriculture Minister Narendra Singh Tomar, the BJP’s Assam in-charge, and his deputy, Minister of State, Jitendra Singh were the part of the meeting, including leaders from northeastern states like Assam Chief Minister Sarbananda Sonowal and cabinet minister Himanta Biswa Sarma.

The elections will be held in three phases in Assam dated on March 27, April 1 and April and results on May 2.