The MP did not name those Chief Ministers whom he alleged for paying. Apart from this he also alleged Congress for misleading the farmers by quoting 'playing shakuni'. 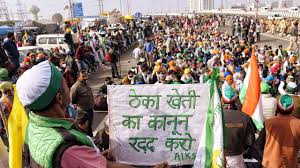 On Tuesday a BJP MP Ramesh Bidhuri said that the protesters at the Singhu border are ‘not the farmers’ and are ‘paid by three Chief Ministers’ and another politician Farooq Abdullah said that the farm laws are not religious scriptures which cannot be changed and a solution has to be figured out.

The MP made his statement while opening the Lok Sabha dicussion on Motion of Thanks to the President’s address. “Those people (protestors) are leaders affiliated with the CPI and CPM,” said Bidhuri.

He did not name those Chief Ministers whom he alleged for paying. Apart from this he also alleged Congress for misleading the farmers by quoting ‘playing shakuni’.

After Bidhuri the Chairman of National Conference Farooq Abdullah said, “I just want to make this request on the farmers’ issue. It is not a ‘Khudai kitaab’ (religious scripture) that we cannot make changes. But we have made law. If they (farmers) want it to be scrapped, why can’t you talk to them,” he also said, “I would request you with folded hands that let us not stand on prestige… This is our nation. We belong to this nation and if we belong to this nation let us respect everybody in this nation,” Abdullah said, adding, “Come out with a solution.” In last he Abdullah also urged the Law Minister frame some laws to stop such activities.

Bidhuri also got support from BJP’s Ritana Bahuguna Joshi who said that farmers would benefit from an open market.