A lawyer from Calcutta High Court filed a petition against the rath yatras stating that 'the rath yatras will provoke communal tensions and hence should be allowed'. 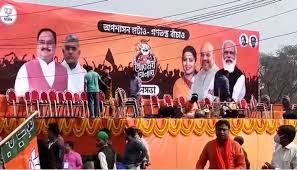 Roadshows were the biggest BJP’s tool for Bengal campaigning till now, wherein the leaders used to be on the top of a truck decorated with marigolds traveling short distances, but the party has now decided to go on chariots for their campaigning for the upcoming Bengal assembly polls.

BJP has planned total five rath yatras starting from Saturday by BJP president JP Nadda from Nabadwip in south Bengal then on February 11 by Union Home Minister Amit Shah where he will flag off a rally from Cooch Behar in north Bengal and the other three will be from three different locations of Kakdwip,Trapith and Jhargram. The yatras will cover all the 294 seats of the Bengal assembly and each yatra will run for around 25 days.

The decision has sparked so much of controversy as a lawyer from Calcutta High Court filed a petition stating that the rath yatras will provoke communal tensions and hence should be allowed but BJP says that these rallies are legal political tools and claimed that these are the ways to restrict opposition.

“The opposition has the right to go to the people in a democracy. But Mamata Banerjee’s government always tries to silence them,” and “The yatras will expose corruption in the Mamata Banerjee government on coal scam, cow smuggling, tolabaji,” said the BJP’s national general secretary, Kailash Vijyavargiya.

BJP’s Bengal spokesperson Samik Bhattacharya called these rallies as “parivartan yatras” by saying, “This yatra is only for politics. This rath yatra is not for building Ram Mandir or any other temple. This is simply for ‘parivartan‘ (change).”

However, this “Parivartan” was Mamata Banerjee’s slogan back in 2011 when she removed the Left Front government from power but now BJP is saying “Parivartan“.

The Trinamooli is paying so much of heed to these yatras and has planned not to attack the rath yatra plan as of now.

The secretary general of Trinamool Parth Chatterjee said, “Permissions for the rath yatra is a completely administrative matter. Let the administration decide. We don’t want to destroy our culture. We must protect the secular value of the state”.

Another TMC member Bratya Basu alleged BJP by saying, “Each movement of the BJP is to polarise Bengal and create a division in Bengal.”

On the other hand in past some BJP decisions have caused controversies too like in 2017, the BJP in Bengal had launched the sword wielding rallies on Ram Navmi which turned the festival into a political heating between the different parties.

In 2-19, the Supreme Court had said no to yatras because of the state’s concerns over law and order issues, so the filing of petitions may derail the BJP’s plan.