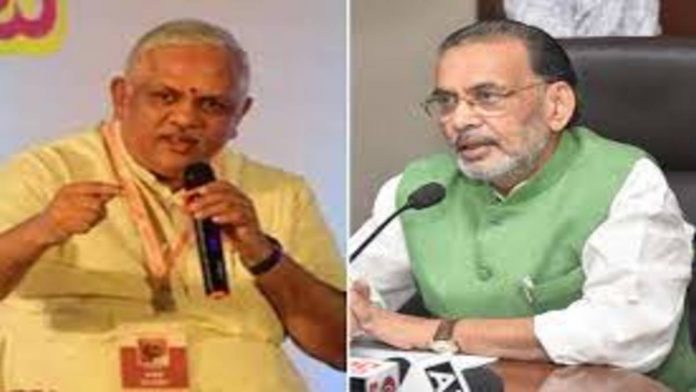 BJP which is going to contest critical elections in Uttar Pradesh next year, in its series of meetings in the state has flagged concerns over the rising criticism on Chief Minister Yogi Adityanath’s handling of Covid pandemic.

The duo has even met with Chief Minister Yogi Adityanath and will speak with two of his deputies. There have been a lot of rumours that the trio will be replaced ahead of elections, which the sources have refuted.

The BJP leaders were reviewing the work done for Covid relied across the states in last few months and before, said a party press release.

However, the handling of Covid surge by Yogi Adityanath’s government has been widely criticised over social media and is also a big target for a sustained campaign by the opposition in Uttar Pradesh who allege that the mishandling of the ruling government has resulted in large number of deaths in the state.

Pictures of bodies floating in the Ganga river or covered in shallow graves alongside it from numerous districts in UP have generated international focus. The UP government has hit out at the reports, blaming the media for distorting the condition, and guarantee that the Chief Minister has continually been on the ground visiting every part of the state.

Among all the leaders whom the duo from Delhi met was the state Health Minister Jai Pratap Singh. Both Mr Santhosh and Mr Singh discussed ways to further publicise the government and party’s handling of the pandemic among the masses, said the sources.

However, there are so many MLAs and MPs who express their grievances against their own government to Media.

A BJP legislator in Uttar Pradesh’s Sitapur, 80 km from Lucknow, said a week ago that officials as him didn’t actually count and such a large number of statements to the media may prompt a ‘sedition’ case against him.

“I have taken many steps, but ‘vidhayakon ki haisiyat kya hai (what stature do MLAs have?)’. If I speak too much, then sedition charges may be used against me,” said MLA Rakesh Rathore when questioned about the endeavors to operationalise a government trauma centre in a building that had been ready for years.

According to the sources, the BJP team from Delhi is also assigned with a task to find out what went wrong in the latest Panchayat elections in the state as the big losses in party’s strongholds points out trouble for the party as it prepares for reelection in less than a year.

The BJP had a misfortune in recent local body elections in Ayodhya and Mathura – seen as grassroots-level feedback in front of elections. In Gorakhpur, the home turf of the Chief Minister, the BJP went in a dead heat with the Samajwadi Party.