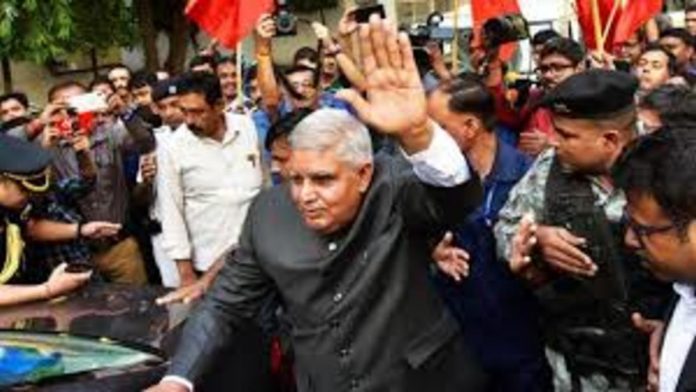 West Bengal is a state in India. Governor Jagdeep Dhankhar, the Chancellor of State-run Universities, lashed out at the state administration on Sunday for putting off discussions about replacing him as Vice-Chancellor of State-run Universities. Bratya Basu, the state’s education minister, tweeted on Friday that the state should ‘consider’ whether the governor should continue to serve as ex-officio chancellor of all state-run colleges, or whether prominent scholars should be nominated instead.

“You make the chief minister the governor also in addition to making her the chancellor,” he said sarcastically, terming Basu’s stance as inappropriate. Dhankar had earlier called a meeting of chancellors and vice-chancellors of private universities in the state in his capacity as Visitor on December 18.

The Governor attempted several times to meet with the vice chancellors or executive directors of the universities but was unsuccessful.

On a variety of matters, including the disagreement over his attempts to exercise his powers as Chancellor, the Governor has had multiple run-ins with the state administration under CM Banerjee. Dhankar further stated that he had not granted his consent to the Howrah Municipal Corporation (Amendment) Bill, and that a submission made by the state counsel general before the Calcutta High Court to that effect could be incorrect.

“With reference to the partition of Howrah Municipal Corporation and creation of Bally municipality, there is no paper, discussion, or consideration before the governor,” he added. The Governor had previously stated that he had sent back the bill on November 24 with questions that had yet to be answered, in order to exclude sections of the former Bally municipality from the Howrah Municipal Corporation.

“It is wrong for the Advocate General to submit before the high court that the governor has given assent to the bill,” he said. State Advocate General S N Mookherjee on Friday told the Calcutta High Court that the governor has given his assent to the bill, paving the way for holding separate elections to the two bodies. Trinamool Congress MP Sougata Roy however said that the state had sent its reply to the questions raised by the governor regarding the bill which was earlier passed in the West Bengal Assembly.

“He (governor) is deliberately trying to delay elections of Howrah Municipal Corporation and Bally Municipality … this is purely politically motivated,” he said, questioning Dhankhar’s assertion that he did not give his assent to the bill. BJP national vice-president Dilip Ghosh however charged that the Mamata Banerjee government is trying to turn the governor into a rubber stamp.

“This is not good for the constitutional setup,” Ghosh said. Dhankhar, who has enjoyed a not-so-friendly relationship with the TMC government since taking over as governor in July, 2019 with both sides sparing no chance to attack each other, was also critical of Assembly Speaker Biman Banerjee. Banerjee has on Saturday said that he has written to President Ram Nath Kovind and Prime Minister Narendra Modi accusing Dhankhar of his “interference” in legislative matters.

“The Speaker should be aware of the duties and responsibilities of the position,” the governor said. He said that on the two occasions he addressed the House, he was reminded of the Emergency era, as both the times his “address was blacked out”.

Dhankhar claimed that the Assembly was shut when he went to see it for the first time. “The Speaker’s behaviour cannot be tolerated,” he stated. Sougata Roy, on the other hand, took issue with Dhankar’s remarks against the speaker, claiming that the Governor was “overstepping his bounds” and had previously attacked Biman Banerjee.

The BJP’s Ghosh, on the other hand, claimed that the governor is a constitutional authority, and that insulting Dhankhar was tantamount to denigrating a constitutional position. “For a democratic setup, this is a reason for concern,” the BJP leader remarked.