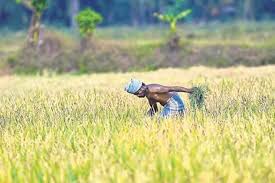 The poll bound West Bengal has finally come on board to benefit the beneficiaries of ‘income support scheme’, PM-Kisan.

The scheme provide benefit of Rs 6,000 per annum to each landholder farmer family. The money will get transferred by the central government in three equal installments of Rs 2,000 directly in the bank accounts of the farmers.

Around 55 % of the total farmers in West Bengal have voluntarily registered themselveds under the scheme despite the West Bengal opposing it to be launched for two years.

This BJP’s promise to pay the dues to the farmers if voted to power, just ahead to the polls shows up a political agenda and sends a clear message to the ruling Trinamool Congress led by West Bengal Chief Minister Mamata Banerjee.

Over 1 lakh farmers are registering themselves every single day on PM-Kisan portal since last two weeks. By checking the figures the state government has now planned to verify those who have registered and has also forwarded the list of beneficiaries to the agricultural ministry.

“We are cross-checking the details by corroborating it with Aadhaar-seeded bank accounts of farmers. Transfer of money into eligible farmers’ accounts may happen soon. We expect the state to quickly verify the details of as many potential beneficiaries as possible at its end,” said a senior official from the agriculture ministry by verifying the list of beneficiaries from the state.

Over 10.7 crore farmers have been benefited under the scheme so far. States of Maharashtra, UP, MP, Rajasthan and Bihar are amongst the top five states with absolute numbers of beneficiaries.

Mostly all the states had successfully launched the scheme back in February 2019 when it was announced by the Prime Minister Narendra Modi. Those who had not registered for the scheme have also registered themselves in past few months but West Bengal was the state who had not till now.