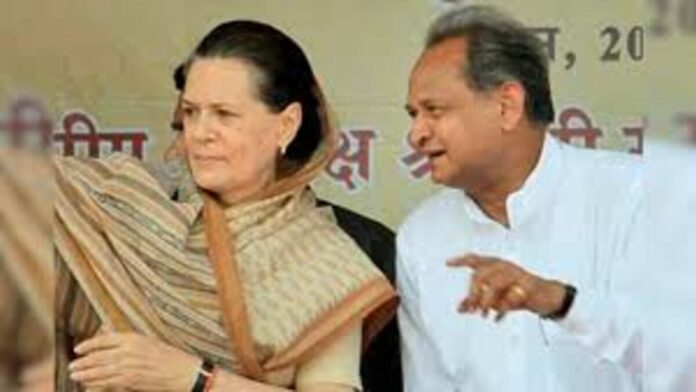 Given that the party observers’ report did not hold the 71-year-old accountable for the crisis in the desert state, Rajasthan Chief Minister Ashok Gehlot is likely to keep his position as CM for the time being.

The “crisis” started when 82 Congress MLAs threatened to quit before of the party convention where the possibility of discussing a candidate for the next chief minister was expected to come up. Even if Gehlot vacates the seat and declares his candidacy for the Congress’ top position, the Gehlot loyalist MLAs are opposed to Sachin Pilot becoming the next chief minister.

The Congress leadership and Gehlot supporters got into a confrontation as a result, and the party high command requested a report from its party observers, Mallikarjun Kharge and Ajay Maken.

In their assessment on the political crisis in Rajasthan, the observers concluded that Gehlot was not at fault but suggested taking disciplinary measures against powerful figures for convening a rival conference.

The chief minister had to be picked from among those who supported the government at the time, according to a resolution they had passed. The three Rajasthan Congress leaders have now received a show cause letter from the party, which requests a response within 10 days.

The two observers were forced to leave Jaipur without convening the CLP meeting because a sizable contingent of MLAs who were thought to be supportive of Chief Minister Gehlot declined to attend and proposed a number of requirements for the appointment of Gehlot’s successor.

Rajasthan minister PS Khachariyawas stated on Tuesday that the party observers should have waited to speak with all the MLAs before making their approach to Ashok Gehlot.

Do you think we will decline to have one-on-one meetings with observers? The observers came, and we had a family chat, he added. “MLAs are ready for a one-on-one conversation. This is democracy.

We are not against any member of the Gandhi family, he continued, adding that Sonia Gandhi is like a mother to all Congress members and that Rahul Gandhi is traveling a thousand kilometers to save the party.

Ashok Gehlot, who had been widely considered for the position of Congress president, was hesitant to step down from his position as chief minister until Rahul Gandhi made it plain that a dual function would not be permitted in accordance with the “one person, one post” concept.

Gehlot-supporting MLAs skipped a Congress meeting and made demands, including that the future Congress president appoint Rajasthan’s chief minister. The high command refused to accede to their requests. Reason? Conflict of interest since Gehlot had the authority to choose his own replacement in Rajasthan.

The Gandhis apparently took note of the “indiscipline” and were concerned about the happenings. Loyal supporters of Gehlot were taking a wait-and-see attitude in order to learn more about the high command’s “adverse move.” It is obvious that now that Gehlot has received a clean bill of health from the party observers, MLAs who are thought to be loyal to him may face punishment, and attention may soon turn to the Congress president election.

AICC Treasurer Pawan Kumar Bansal has nomination forms collected, but they might be for someone else, according to Madhusudan Mistry, head of the party’s central election authority, amid speculation that Ashok Gehlot will run for president of the Congress. Bansal has declared that he was not competing.

Neither Gehlot nor anybody else had contacted Mistry on whether Gehlot would submit his nomination papers, according to Mistry.

On October 8, at 5:00 p.m., the final list of candidates will be made public. If necessary, the election will be place on October 17. On October 19, the vote-counting process will begin, and the results will be announced that same day.