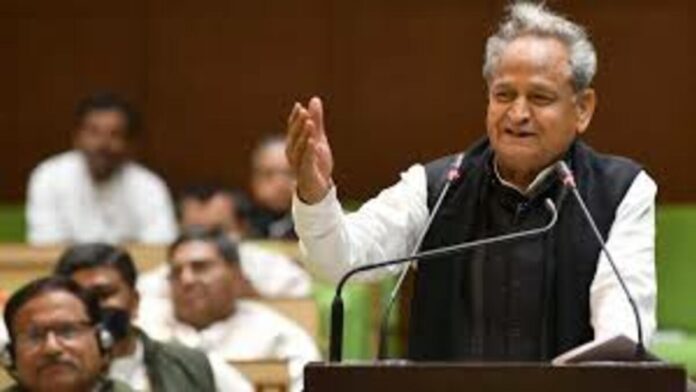 According to sources, Rajasthan Chief Minister Ashok Gehlot, a front-runner for the position of Congress chief, met with his MLAs yesterday night and assured them that he “is not going anywhere.” He arranged a supper for Vice President Jagdeep Dhankhar before the meeting.

This news is being reported amid rumors that if the senior Congressman relocates to Delhi as party leader, his former adversary Sachin Pilot, whose uprising nearly toppled his government, may win the position of Chief Minister.

It is understood that the 71-year-old Congress veteran informed the lawmakers that he will submit a nomination for the position of Congress chief. He reportedly told the MLAs, “I won’t be far from you,” saying, “Tha soon door nahi.”

Mr. Gehlot remarked that no matter where he goes, he will continue to serve Rajasthan. He made it plain that he has no plans to resign as Chief Minister at this time by saying, “Main kahin nahin ja raha, chinta mat karo” (I am not going anywhere, don’t worry).

He informed the MLAs that he will meet with Sonia Gandhi, the party’s president, today and that he will depart this evening to visit Rahul Gandhi, who is participating in the Bharat Jodo Yatra, a Congress march from Kanyakumari to Kashmir to drum up support before the general election in 2024.

According to reports, Mr. Gehlot promised the MLAs that he would make “one final effort” to persuade Rahul Gandhi to become the new party leader. After Congress’ disappointing performance in the 2019 Lok Sabha elections, Mr. Gandhi resigned from his position and has refused to do so ever since.

All of the MLAs in Rajasthan were instructed by the state’s chief minister to travel to Delhi when he files his nomination. He declared that he is a “faithful soldier” and that he “shall do what the party says.”

Apparently to prevent Mr Pilot from trying to fill the political void, Mr Gehlot reportedly told the Congress leadership that he wants to continue serving as Rajasthan’s chief minister for a while even if he becomes the party’s leader.

According to sources, Mr. Gehlot would prefer a loyalist to hold the position of power at home if he had to relocate to the national capital. If not, it is understood that he would like to maintain both positions by taking over as acting president of the Congress, with Sonia Gandhi serving as permanent leader.

Shashi Tharoor, a leader in the Congress, has also stated his intent to run for president and received Mrs. Gandhi’s approval. While Mr. Gehlot is a devoted supporter of the Gandhis, Mr. Tharoor was one of 23 senior party figures who wrote a letter to Mrs. Gandhi in 2020 demanding significant party reforms.

Up to September 30th, the Congress will accept nominations for the position of party leader. On October 17, there will be elections, and on October 19, the results will be announced.