Arjun Rampal Star As Dalit In Historical Drama, ‘The Battle of Bhima Koregaon’ 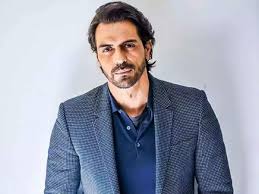 Arjun Rampal is playing a Mahar warrior in the upcoming film, The Battle of Bhima Koregaon. On Thursday, the actor shared his look from the film with a new poster. Talking about playing a dalit hero, he said, “I had always wanted to do a period film especially a historical one. So, when writer-director Ramesh Thite approached me with this role, I immediately agreed. Here I play a brave Mahar war hero who defeats the huge army of the Peshwas.”

The story of the movie is a sensitive one that can create a backlash from the higher castes, but Arjun isn’t worried. Talking about the film he says, “I don’t expect a backlash from the higher castes as this film is based on true facts with a message to respect all castes, creeds and religions. The father of our Constitution Dr. Babasaheb Ambedkar has given us the right to equality, and as Ambedkar says one should know history to make history. The film is based on historic facts which depict the happenings during 1795-1818. ”

Earlier the actor had compared this war to the Holocaust. Talking on the same, he explained, “I had cited the example of Holocaust as Dalits were inflicted with the same troubles that Nazis did with Jews.”

On the web series front, after the success of The Final Call where he played a pilot, Arjun Rampal is all set to play a defence lawyer in his next. Titled, Nail Polish, this is also a Zee5 original.

Talking about the same, the actor revealed, “It’s a legal thriller that explores the uncertainty of the human mind and releases in January 2021. It’s directed by English stage actor and playwright Bugs Bhargav Krishna for Zee5.”

However, the shoot wasn’t without some misadventures. Both his co-actors, Manav Kaul and Anand Tiwari tested positive on the sets. But thankfully the Arjun came out of it unscathed. “I was happy to work with my co-actors on the web series Nail Polish like Manav Kaul, Rajit Kapur and Anand Tiwari. But Covid-19 struck them and hence the shoot had to be stopped. I was happy to work in spite of the Covid-19 precautions because the sets have all the sanitizers in place. Yes, we were in a bubble at that time but now the shoot has finally wrapped up.

His future projects include Nastik where he plays a cop and the movie depicts his relationship with a small kid played by Harshali Malhotra and Mughal Road, which is based on another lesser known historical event that took place during the Partition.