The film is based on war veteran Brigadier Balram Singh Mehta's book, titled 'The Burning Chaffees'. 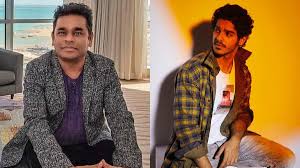 AR Rahman a music maestro and Academy Award-winner has been enlisted for composing music for actor Ishaan Khattar starrer ‘Pippa’. It is a war-drama directed by Raja Krishna Menon. Actors Ishaan Khattar, Priyashu Painyuli and Mrunal Thakurare in lead roles in the film.

The film is based on war veteran Brigadier Balram Singh Mehta’s book, titled ‘The Burning Chaffees’. Brigadier Mehta of the 45th Cavalry Tank Squadron had fought on the eastern front during the India-Pakistan battle of 1971.

Ishaan Khattar will be seen as the decorated Brigadier in the film and the ‘Pippa’ is taken from the Russian amphibious war tank called the PT-76, popularly called as Pippa.

Ronnie Screwvala tweeted the information through his Twitter handle RSVP Movies as, “Delighted to have the Oscar winning Maestro @arrahman scoring the music for #Pippa (sic).”

The music sensation AR Rahman expressed his happiness for coming on board with Pippa. “The story of Pippa has a very human connect. It’s about every film, and I instantly related to it. I am looking forward to working with Raja Krishna Menon, Ronnie Screwvala and Siddhartha Roy Kapur,” said Rahman.

“collaborating with him has always resulted in spectacular albums and I’m inclined to believe that his music will be the beating heart of our film,” said Ronnie Screwvala who always that Patriotic and inspiring music is Rahman’s forte.

Siddhartha Roy Kapoor who is hopeful of another iconic album from Rahman too added that, “Rahman’s music adds depth to the narrative of any film and helps in making the storytelling all the more familiar to the viewers”.

Apart from Pippa Rahman has also signed to compose music for director Gautham Menon’s next project which will star Simbu for the lead role. Thanking AR Rahman Gautham Menon tweeted “Dear Universe, Thank you for making this possible. It’s @arrahman ‘s music and his Aura that will light up our lives once again in our next collaboration. We truly believe in that. Thankfully- @SilambarasanTR_ & myself. @IshariKGanesh @VelsFilmIntl #HBDSilambarasanTR (sic)”.