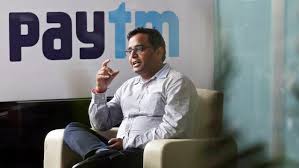 Accusing the Paytm CEO Vijay Shekhar Sharma for breaking his promise and embezzlement of his funds an US-based Indian national has asked for a big share in Paytm’s parent company, One9 Communications with a board seat and a recognition as a co-founder of the company.

The 70 years-old, Ashok Kumar Saxena, who claims to be a founder-director of One97 Communications, lists initial investments of $27,500 between January 2001 and April 2002 towards his promised stake of 55% in the company through an agreement allegedly signed in September 2001. In a legal notice to Sharma, he has also alleged that he was “wrongfully removed” as a director in February 2004.

Ashok, who claims to be an aerospace and telecommunications technologist and also a serial entrepreneur said that he could not take up the issue earlier because of his certain personal issues.

On February 1, a notice was sent by a legal firm August Legal in which Ashok has claimed that he met Sharma in 1999 time for the first time when he was a fresher as he had jsut passed out from college and was working on various assignments of designing websites, maintaining and hosting.

“At the relevant time, you were working as a consultant for an Indian project of SigmaNet Network Corporation (a US company founded by our client) providing programming services for its web portal, IAOL… Sigma-Net was acquired by Startec Global Communications (a publicly held company in the US) in December 1999. You may be familiar with the name Startec Global since it finds mention on your LinkedIn profile where you falsely claim to be its erstwhile CTO between April 2000 and May 2001,” said the notice.

Ashok claims to have “invested his time, reputation, and business network” to meet potential customers and clients for One97 Communications, including Bharti Airtel. “… the entire blueprint of the Astrotel services including conception, planning and successful execution was spearheaded by our client and it is not out of place to mention that Astrotel services was one of the highest revenue grossers for Airtel at the relevant time,” said the notice.

“It is clear that company (One97 Communications) was formed and was being run by you on the basis of trust and confidence reposed in you by our client (Saxena),” said the legal firm August Legal in its notice.

When it comes to promises he said that in a written agreement he was promised to be given a 55 % share in One97 Communications along with rights to veto the sale of shareholding to any outsider other than the firm.

“However, in spite of the written agreement and taking advantage of our client’s busy work schedule in the US, and his inability to follow up and remotely supervise all your actions pertaining to the company, you failed to allot the shares to our client or to appoint the third director nominated by him under some dubious pretext. You also failed to share the statement of account of the company with our client as agreed or to repay the loans of our client,” the notice said.

The Paytm founder Vijay Shekhar Sharma has refused all the charges levelled against him and also sought a copy of the agreement which Ashok had used to claim what he said from his legal firm Shardul Amarchand Mangaldas.

In its reply to the notice the Shardul Amarchand Mangaldas said, “… our client does not admit the contents of the captioned notice and reserves his rights and remedies under law”.

However, it is yet not clear that how authentic are the claims made by Ashok Kumar Saxena. So further investigation will go under to find out the root of the matter.