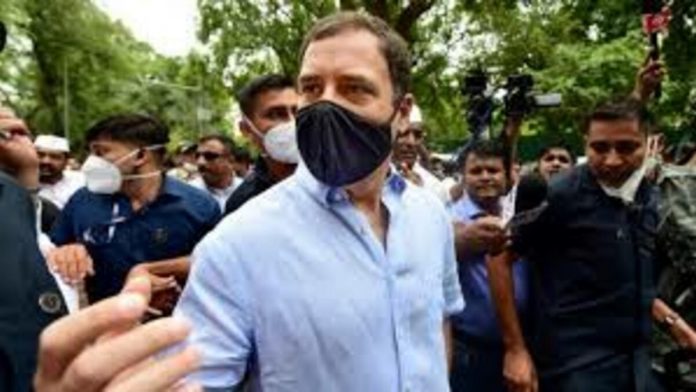 Rahul Gandhi, the party’s leader, arrived at the Enforcement Directorate’s office today for questioning in the National Herald money laundering case, following a massive protest by the Congress on the streets of Delhi.

As Mr Gandhi, joined by his sister and Congress national secretary Priyanka Gandhi Vadra, marched towards the investigative agency’s office, chaotic scenes were reported in the streets leading up to it, with party workers chanting anti-government slogans.

The Congress march passed through two points of barricading before being stopped at the third, where Delhi Police used excessive force to put an end to the protest gathering. Ms Gandhi Vadra turned back with the Congress leaders at that point, and Rahul Gandhi and his lawyers began questioning. Following that, the Congress leaders sat in the streets and continued their protest.

To begin the protest, the Gandhis went to the Congress headquarters, where prominent officials assembled.

Earlier, members of the Congress were arrested and thrown into buses while raising slogans in favour of their leaders. Later in the day, more Congress employees are expected to go to the streets as part of the party’s show of strength.

Prohibition orders have been issued near the agency’s headquarters.

The protest march was denied permission by Delhi Police yesterday night, citing the “communal and law and order situation” as well as VVIP activities. Congress leaders pleaded with them to reconsider their choice, but they refused.

The party then decided to carry out the scheduled protests in Delhi and other cities. Protests are also taking place in locations such as Indore, Madhya Pradesh, and Guwahati, Assam.

Prime Minister Narendra Modi and Home Minister Amit Shah have been accused by the Congress of utilising the Enforcement Directorate and other central agencies to stifle the opposition.

The BJP has been accused of “vendetta politics” by the party, which has dismissed the claims against its leaders as “false and unsubstantiated.”

The central agency has also summoned Sonia Gandhi in this matter. She requested extra time after she tested positive for Covid. A new summons has been issued by the agency for June 23.

Due to Covid-related concerns, the Congress chairman had to be hospitalised to a Delhi hospital yesterday afternoon.

“Nobody, including the English and these new overlords, can oppress us. We will march to the ED’s office, choosing Gandhi’s path and fighting for the poor’s rights. For 136 years, the Congress has been the voice of the average man “he stated

He also called Prime Minister Narendra Modi’s government “cowardly” and stated that the Congress is willing to make “sacrifices.”