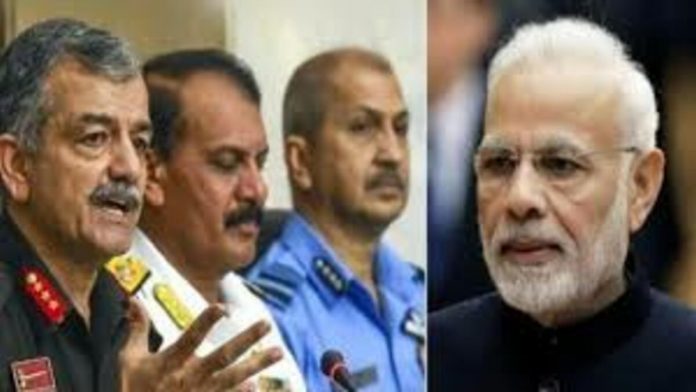 Following massive complaints against the recently introduced Agnipath plan, a contractual recruiting model for the defense forces, Prime Minister Narendra Modi met with the three service chiefs at his residence on Tuesday.

General Manoj Pande of the Army, Air Chief Marshal VR Chaudhari of the Air Force, and Admiral R Hari Kumar of the Navy allegedly each had a 30-minute meeting with the PM. What was discussed at has not yet been made public.

The discussion was convened immediately after the defense ministry gave its second press conference since Sunday to allay the concerns of the protesting youth, who were primarily aspiring military personnel, regarding the scheme’s transient character. The three military chiefs introduced the Agnipath program last week in front of Rajnath Singh, the defense minister.

Soon after, there were violent riots across the nation, with Bihar suffering the worst. Several trains were set on fire, and other public property was also damaged during these protests.

The Agnipath program will remain in place, according to the government, and all applicants will be required to certify that they did not engage in any acts of violence or arson. In the recent days, Singh has also met with the service twice.

At a gathering in Bengaluru yesterday, the prime minister remarked that while many decisions and reforms may seem unappealing, the path will lead the nation to new high points. But during his speech at a Bengaluru event, the PM made no mention of the ongoing demonstrations or the plan.