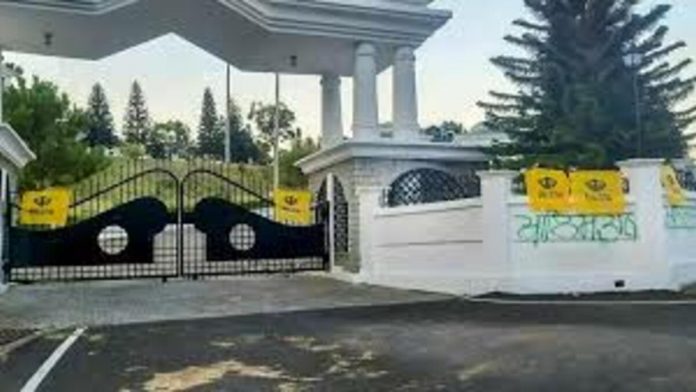 The hill state has increased security starting tonight, following provocative destruction of the Himachal Pradesh Legislative Assembly building this morning and a banned group’s ‘Khalistan’ referendum call. Interstate borders have been cordoned off with police barricades. Hotels and other “possible hideouts” have also been instructed to be monitored closely. According to the official directive, bomb disposal units have been placed on high alert, and protection for important state infrastructure has been increased.

The state’s borders have been placed on high alert, with police officers conducting “intense” night patrols.

The increased security comes after the banned Sikhs For Justice (SFJ) claimed that a ‘Khalistan’ referendum will be held in Himachal Pradesh on June 6. The order document also mentions other recent instances in neighbouring states involving pro-Khalistan actions.

After flags of ‘Khalistan’ were spotted draped over the gates and boundary wall of the Himachal Pradesh Legislative Assembly in Dharamshala, and pro-Khalistan graffiti was written on its walls, Chief Minister Jairam Thakur ordered a probe this morning.

The state police have stated that visitors from Punjab are suspected of being involved.

The security along the borders with neighbouring states Jammu and Kashmir, Ladakh, Uttarakhand, Haryana, and Punjab would be reviewed, according to Chief Minister Thakur. Himachal Pradesh is a popular tourism destination in India.

According to reports, an intelligence notice released on April 26 warned of such an incident.

According to the alert, Gurupatwant Singh Pannu, the Chief of Sikhs for Justice, had written to the Himachal Pradesh Chief Minister, claiming that a flag of Bhindranwale and Khalistan would be raised in Shimla.

The SFJ was agitated when Himachal Pradesh banned vehicles wearing Bhindranwale and Khalsitani flags. The group had planned to raise the Khalistani flag on March 29 but was unable to do so due to tight security.

“I strongly condemn the cowardly act of hoisting Khalistan flags at the Assembly Complex entrance in the dead of night. Because only the winter session is held here, greater security precautions are required just during that time “This morning, Chief Minister Thakur tweeted in Hindi.

“This cowardly incident has been carried out as a result of this, but we will not tolerate it. This incident will be examined right away, and the perpetrators will face severe consequences. I’d like to tell those folks that if they have the courage, they should come out in the daylight rather than at night “Another tweet was read.