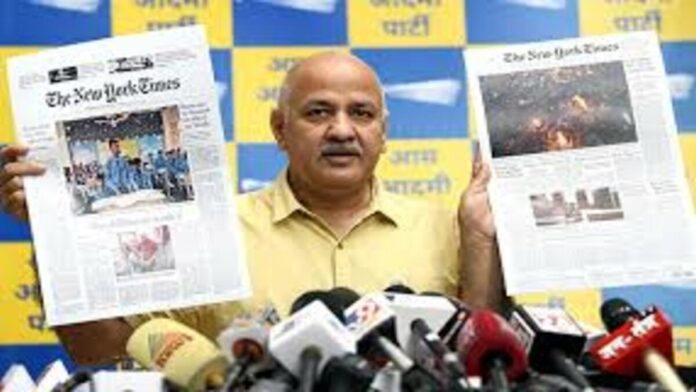 After the Bharatiya Janata Party (BJP) launched a harsh attack on the Aam Aadmi Party (AAP) over Delhi’s educational system and received a mention in the American national daily, The New York Times (NYT) contacted the news agency. Amit Malviya, the head of the BJP’s National Information & Technology Department, pointed out the similarities between the mentions in the NYT and Khaleej Times, dismissing them as “nothing but paid promotion.”

The American daily confirmed to India Today Group that the reference was the outcome of independent and impartial “on-the-ground reporting,” refuting the BJP’s claim that it was an advertisement.

The New York Times responded to the news agency’s inquiry by stating, “To confirm, the article on the top page of The New York Times International is news reportage, not an advertisement or paid for in any way.

“The New York Times has covered education as a topic for many years, and our piece about efforts to improve Delhi’s educational system is based on unbiased, on-the-ground reporting. The New York Times’ journalism is always impartial and unaffected by political or commercial interests. We frequently licence and distribute our content to other news sources.

The declaration followed Malviya’s use of Twitter to draw attention to the startling similarities between the mentions of Delhi’s educational system in the two major international publications. He asked, “How is it that New York Times and Khaleej Times publish exactly the same story on Delhi’s nonexistent educational system, word for word, written by the same person, and with the same images (that too of a private school)? The strongest defence for Arvind Kejriwal is simply paid promotion.

Punit Agarwal, who is in charge of the party’s IT cell in Delhi, stated: “NYT & Khaleej Times have exactly the same stories printed with exactly the same works, same photos, and guess what? Same writer. Mr. Kejiwal, this is not breaking news. We refer to this as paid advertising. Manish Sisodia must go to the place where he belongs. That is a prison.

This occurs on the same day that the CBI conducted a raid on the residence of Manish Sisodia, the deputy chief minister of Delhi, in relation to the new alcohol policy. The national capital administration of his party implemented a policy that sparked accusations of corruption before being changed. CBI agents searched 20 locations in six states and the national capital area.

Four public employees, including Manish Sisodia, have been identified in the FIR, a CBI official told a news organisation. Manish Sisodia, meantime, has denied all of the accusations levelled against him and has pledged to assist the probe. The deputy to Arvind Kejriwal also expressed regret that those who perform in the nation face such harassment.

Since the raids, AAP has been working nonstop to publicise The New York Times front page article on “Delhi’s education revolution.” Excise and education are two of the several ministries Manish Sisodia manages.