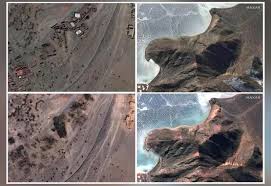 The satellite images on Wednesday showed that China is pulling down the structures and moving vehicles to empty the Line of Actual Control (LAC) and de facto border where the Indian and Chinese troops are in stand-off since June last year.

However, in last week both the countries had announced to pull back its troops, tanks and all other equipment from the banks of Pangong Tso which is a glacier lake in the Ladakh region. It was the flashpoint for the Indo-China dispute.

The satellite images were supplied by Maxar Technologies which showed several Chinese camps which were their at the northern bank of Pangong Tso are now not visible at the site which apparently means they have been removed.

According to a source, same actions are planned from Indian side also.

Earlier this month the Defence Minister Rajnath Singh told in the parliament that both the China and India have decide to pull back their troops in a phased manner from the region of Pangong Tso, following which the military commanders would discuss to end the stand-off in other parts as well.

The major incident happened in June but the tensions between India and China had started from last April only, when India alleged China for intruding in the Indian territory, but the China denied it by saying they were in their own territory.

In the Major incident, happened in June last year when 20 Indian soldiers and an unknown number of Chinese troops were killed in a clash between both the side in the ladhak’s Galwan valley.

“What is happening now is that wherever troops, especially north and south of Pangong Tso, were in eyeball-to-eyeball contact, they have taken a step back to reduce tensions and pave way for further de-escalation,” said an official.

Experts say this withdrawal is only the first step of a long-drawn out process of disengaging.