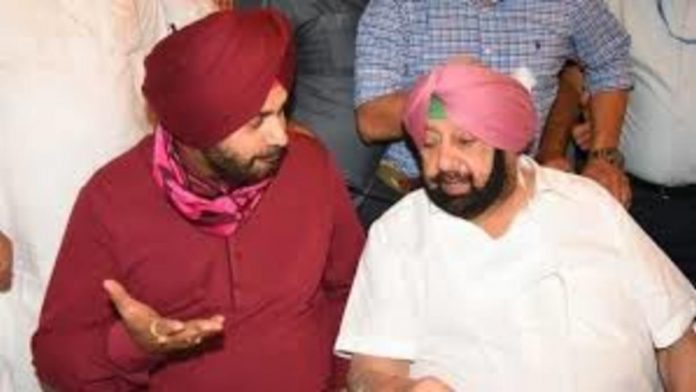 The much-anticipated photo op of Punjab President Minister Amarinder Singh and Navjot Singh Sidhu took place on Friday at Punjab Bhawan, with the CM welcoming the newly appointed PCC chief and other Congress MLAs and MPs over tea, with the two state Congress factions displaying a united front.

Minutes afterwards, the Chief Minister attended a ceremony at the Punjab Congress office where Sidhu was formally appointed as the party’s leader. Just days after imposing a precondition of a public apology by the Amritsar East MLA for his remarks against the CM, Amarinder thanked him and talked of “working together for the welfare of Punjab.”

As he walked by the CM to deliver his address, the cricketer-turned-politician imitated a lofted shot, as if hitting a sixer. He addressed Amarinder and explained that there were issues that needed to be resolved. “It is your responsibility to support the party president,” the CM said to party workers.

Sidhu spoke of reviving the party’s cadres while citing the several difficulties confronting the state, including the farmers’ strike, the sacrilege case, employee demonstrations, and the previous government’s power purchase agreement with corporations. “There are issues that need to be rectified, CM saheb,” he said. “Punjab is asking questions. Why should electricity be bought at Rs 18 per unit? Why shouldn’t the truth of the power purchase pacts be brought out?”

Amarinder Singh, on the other hand, outlined his government’s accomplishments and stated that the focus should be on building the Congress party. “When Soniaji told me that they want to make Navjot Singh the new president, I came out and told the press that we will bow before the decision of the Congress president. Now, we will have to be together in the fight for keeping Punjab and our country safe.”

“But with time, the expectations of people grow, and they start complaining about unfinished works.” the CM remarked, citing the state’s top ranking in basic education and the highest contribution of wheat harvest to the central pool as his government’s main successes.

On the subject of sacrilege, Amarinder wanted to make it clear that legal concerns do arise from time to time. “Challans in Bargari, Kotkapura and Behbal Kalan cases have been submitted. These things take time. They (Badals) gave the investigations to the CBI, we took it back from the apex court. They have been exposed, the Badals and Majithia will be decimated in the next elections,” he stated.

“Not only Punjab, we have a duty towards the nation. We share a 600-kilometre border with Pakistan and daily ammunition is reaching there; they want to spoil the atmosphere, drones are being sent. The people of Punjab will have to join in the fight and remain vigilant… Navjot, you will have to bring Punjabis along to fight this with courage,” he said, adding, “I don’t trust the Akalis or AAP, we have reports that AAP is complicit.”

“We will have to reveal the names of the big fish,” Sidhu said of the drug situation. The new PCC chief stated that he will bring everyone along. “I have a thick skin, nothing bothers me. I have no ego and will work shoulder to shoulder with you. Those who criticise me make me better.”

Sidhu said he will soon go into action and set up base at the Congress Bhawan on August 15 and would like ministers to spend three hours there every day, a veiled reference to Badals. “I will not back out from the 18-point agenda of the high command. The Punjab model will beat the Delhi model,” he stated, sarcastically addressing AAP.