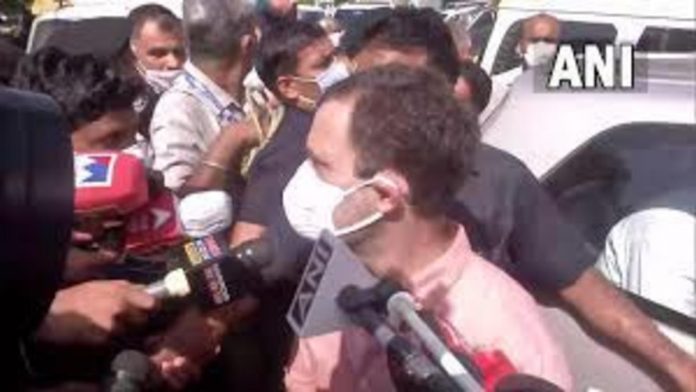 Congress leader Rahul Gandhi on Wednesday met the family of 9 year old victim who was allegedly raped, murdered and forcibly cremated in Nangal Village of Delhi’s Cantonment area. The nine year old was a Dalit girl.

The incident has triggered outrage from civil society groups, activists and also political leaders of opposition who are questioning Union Home Minister Amit Shah under whom the Delhi Police works.

The protestors have come out on the roads holding posters saying “give justice to the little girl” and requesting death penalty for all the four accused in the heinous crime.

The incident was reported on Sunday and the family of the victim who lived in the Cantonment area has been protesting against the horrific incident since then.

The Delhi Chief Minister Arvind Kejriwal, who has pledged to help the girl seek justice and said that he will also meet the family of minor girl has been hugely criticised for not speaking on the atrocity.

“We’ll help them in all ways in their battle for justice,” said Kejriwal.

Dalit leader and Bhim Army Chief Chandra Shekhar Aazad has also met the girl’s family and said that his organisation will join and support the protests happing in Nangal Village.

“This is my own family. She was my sister,” he said tweeting.

“From Prime Minister to Home minister everyone lives here still there is no sense of safety for women. Why has the Chief Minister not met the victim’s parents yet? He lives only a few kilometres from here,” he said criticising PM Modi. He even criticised CM Kejriwal and Home Minister Amit Shah.

The Delhi Commission for Women has launched an inquiry into the incident and summoned the city police after the allegations that she was raped, murdered and forcibly cremated at a crematorium by a priest who falsely said that she was electrocuted.

“What was my daughter”s fault? How will I live without her?” said the girl’s mother wailing as hundreds of locals including girl’s parents staged protest near the crime spot in Old Nangal area in southwest Delhi. They demanded capital punishment for the accused.

“My daughter went to get cold water from crematorium ground when the incident happened. The priest showed me her body for a very brief interval of time. My daughter”s lips were blue. The priest cremated my child without our consent,” the girl’s mother alleged.

The victim’s family lived near the crematorium where she had gone to fetch drinking water from the cooler but never came back.

Some locals who got to know about the incident called the girl’s mother to the crematorium and showed her the body.

They priest claimed that the girl was electrocuted while drinking water from the cooler. On the body of the dead girl there were burn marks on her wrist and elbow. Her lips were also blue, told her mother.

The priest and his companions then tried to manipulate the mother by asking her not to inform the police as it would mean a postmortem, where the organs of the child will be stolen. They even suggested her to cremate the girl immediately.

But the lady and her husband raised an alarm and around 200 villagers of Old Nangal village gathered at the crematorium and the police was informed about the incident.

A senior officer of the South West district police Pratap Singh said that they received the call about the incident at about 10:30 pm. The case has been filed under the charges of child sex abuse and crime against the scheduled castes and tribes.