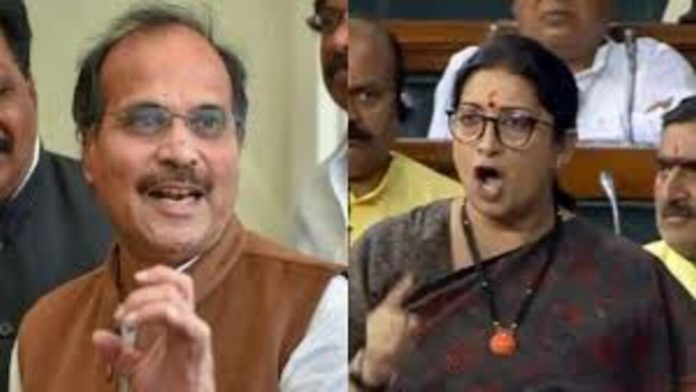 Adhir Ranjan Chowdhury, the Lok Sabha leader for the Congress, has addressed a letter to Speaker Om Birla requesting a sincere apology from Union Minister Smriti Irani for not using honorifics or prefixes to refer to President Droupadi Murmu during her intervention in the Lok Sabha last week.

In an effort to put an end to the uproar surrounding his alleged remarks against Ms. Murmu, Mr. Chowdhury claimed in the letter that his statement was a “slip of the tongue” and that the backlash was “unnecessary and unwarranted.” “This unintentional error occurred since my Hindi is not very strong. I am sorry for my error and have expressed my apology to the Honorable President, Mr. Chowdhury added.

Last Monday, Mr. Chowdhury wrote to Ms. Murmu to apologize for misusing the word “incorrect” to describe her situation. In the letter to Ms. Murmu, Mr. Chowdhury assured her, “I assure you that it was a slip of the tongue.” Mr. Chowdhury said in his letter to Mr. Birla that the error occurred because he was unfamiliar with Hindi because Bengali is his mother tongue.

In the letter, Mr. Chowdhury noted that even though Sonia Gandhi, the head of the Congress, was not involved in that terrible incident, Ms. Irani and the BJP purposefully brought up her name in the debate. He said that Ms. Gandhi had experienced physical and verbal intimidation. He urged Mr. Birla to remove her name from all places where Ms. Irani and other BJP members had raised it the previous week.

This week, the price increase and the GST on milk products are expected to be discussed in both Houses of Parliament.